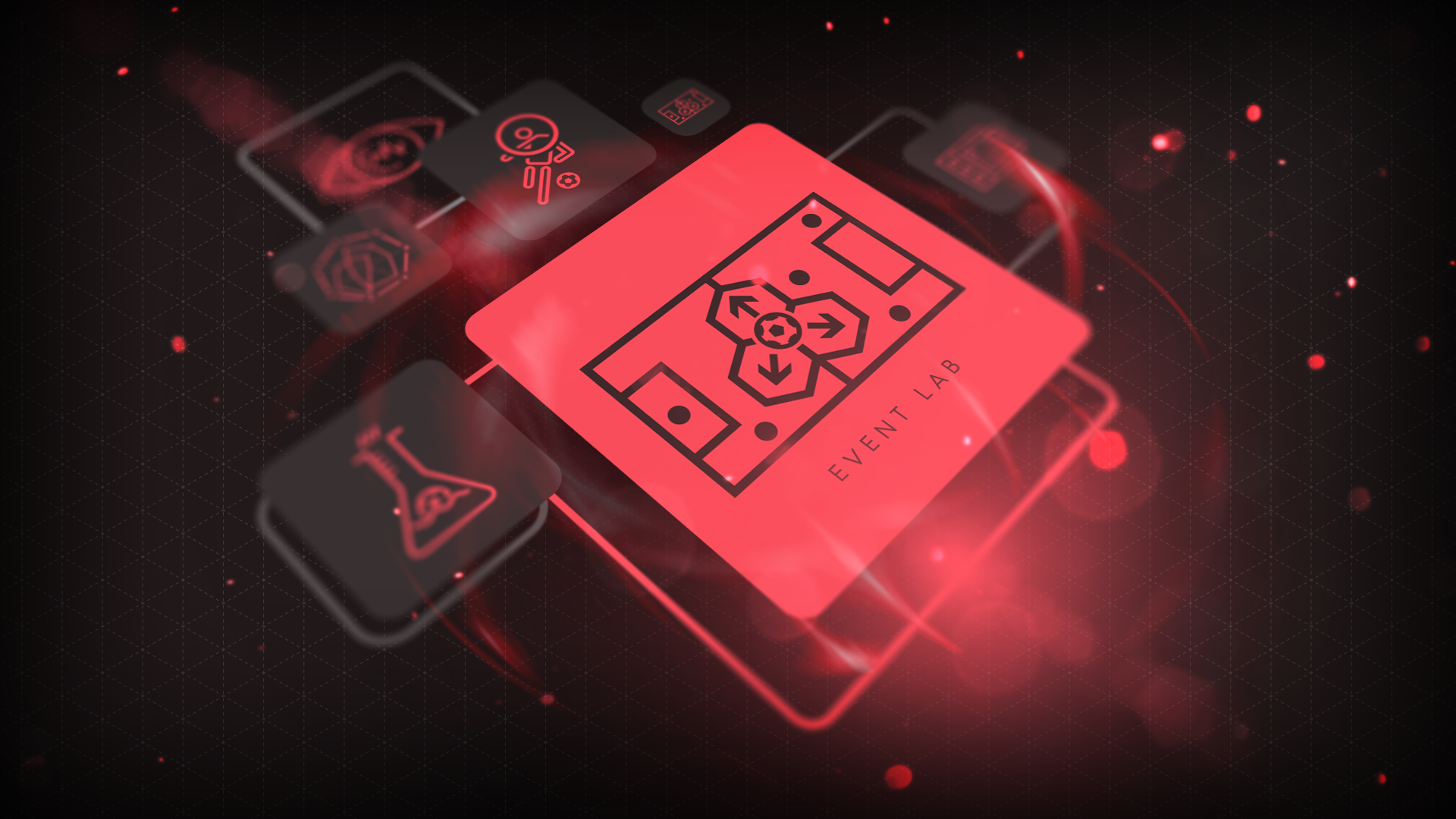 As is customary when updating on new features, I’m going to tell you how excited we are to introduce our latest tool. And, in fairness, we are pretty excited.

So, without further ado…

What on earth is the Event Lab?

In flashy elevator pitch terms, the Event Lab is a new tool that will empower you – namely an analyst at a professional club – to get the absolute maximum out of the data you have access to. You’ll be able to manipulate and work with that data in whatever way suits your needs, customise your own experience and save your preferences.

In tangible terms, this means you will now be able to create and build your own stats, define your own custom locations on the pitch, create your own lists of players to analyse, examine passing angles, event lengths, distances from goal, event start and end locations and a whole host of others. Essentially, if it’s ‘in the data’ you can now make use of it in an actionable way.

The Toolbox itself started life as a series of internal tools to help our writers access stats and analyse the game in a more data-led way. I think it’s fairly safe to say that within mainstream media the use of stats is still in its adolescence, and arguably, three years ago, when we first built these tools, it was somewhere around its pre-teens.

The focus at the time, and for the most part still now, was high level, aggregate stats – how many passes does a player make per 90?, how many successful take-ons? etc. Interesting and valuable stuff, but certainly not pushing the boundaries when considering what’s available within data.

As that landscape has started to mature, and equally as we, as a business, have started to work with pro clubs, the demands in terms of the level of depth and granularity have started to shift. As a result, we needed a tool that reflected that evolution.

As always for us, it isn’t just about making this kind of data accessible to users. There are tools out there that allow you to do this stuff already, and they have done for a couple of years now. The biggest challenge when the data is so rich isn’t accessibility in the form of features, but instead accessibility in the form of usability. Whilst you might be able to access all of the more niche elements of the data, for example, the ‘distance from opponent’s goal differential’ or the ‘shot blocked Y coordinate’, simply enabling them all to the user leads to an experience where the tool looks more like an air traffic control centre than a software to analyse football stats.

As a result, our biggest challenge with the Event Lab was making the tool easy and friendly to use and maintaining the standards we’ve set ourselves when it comes to UX and design. It’s all well and good having all the features of the data available but if you can’t understand how to make use of them without signing up to a new degree it’s a little redundant.

Let’s see it then

Of course, the standard features you’d expect are all there;  you’ll be able to look at things from a team or player level, filter by certain leagues and competitions, seasons, player age, position, nationality, height, footedness etc.

You’ll also be able to control the stats you’re looking at via custom event groups by simply adding stats and selecting them from the dropdown. However, on top of this you’ll also be able to apply a specific state to each individual stat rather than needing to filter the entire table to one state or another. This gives you the flexibility to examine both total and per 90 states (or more) side by side, for any stat.

Creating Your Own Stats

Along with flexible states, and probably the biggest feature in the Event Lab, is the ability to create your own stats. This is something that’s been requested for a while so we’re particularly excited that this is now a feature.

When you create an event you’ll have two routes you can take.

These are stats where you’re taking a base event – like passes attempted – and applying a number of layers on top of it to create something a little more specific. For example, ‘key passes attempted in the final third in the last 10 minutes’.

On the other hand, you also have Compound Events. This is where you would combine multiple filtered events together to create something entirely new, like accuracy or other percentage type metrics. As a simple example, you could divide shots on target from outside the box by shots outside the box to have a view of Long Shot Accuracy. In more complex examples you can also have multiple operators at once to create things like PPDA.

We’ll be going into more depth on event creation and some of the cool things you can do with the feature in future articles so I won’t go into too much detail at this point, but it’s something we’re really excited for our users to get their hands on.

Another feature we’re excited to introduce is the ability for users to define their own custom locations on the pitch. As always, we’ll provide a set of locations as a default (the usual 9×9 plus penalty areas breakdown) but we’re allowing users to go beyond this and draw their own zones and locations simply by dragging an area on the pitch.

The functionality to specify locations on the pitch is nothing particularly new, again there are tools that allow you to do this already, but with most of these tools, this requires you to know the coordinate system inside out (systems that vary from data provider to data provider). As a result, you’re required to specify the exact coordinates you want to define your location and it therefore presents an obvious and frustrating barrier in terms of accessibility. Why force someone to learn this system when anybody could just draw the area they want?

Right, I’ve seen enough, get me a demo

Along with the depth in the form of filtering options, the ability to really drill down into an event was something we felt was essential too. With that in mind, there are a number of layers that you can delve into when analysing the data. You can begin to dissect these metrics and pull apart what’s making them up. For example, if the aggregate stat is goals scored for the season then you can start to look at each individual goal that contributes to that total and see a match by match ‘breakdown’.

Not only that, but you can then take a single goal (or any other event) and start to dissect that too. This additional layer will include every available piece of information about that event – the event angle, event length, where a shot ended up on the goal face, where did the pass that led to the shot start, or what was the post-shot xG for that shot.

Finally, we’ve introduced a simple but incredibly useful feature – Views. With all the available functionality; filters, exclusions, lists, custom events, locations, contextual tools – there’s a lot to make use of. Whilst that’s obviously great, it can get annoying if you’re having to constantly turn all of these things on and off whenever you want to carry out a specific piece of analysis.

This is where Views come in. Whatever you set up, whatever filtering options or custom events you may be using, you can then save all of these options as a View and come back to them again at any time in the future. No matter how complicated and intricate your filtering might be, you can turn it back on or swap to something else in just two clicks.

On top of this, Views can also be shared with the rest of your team to help streamline the analysis process and stop wasted time having to repeat the same tasks across different logins.

If you’ve got this far and digested over 1,300 words on our prized new possession, the Event Lab, then, firstly, thank you, and secondly, it’s time for a very quick recap.

The Event Lab is in-depth. It’s highly customisable. Quite simply, it allows analysts to explore event data deeper than ever before. Users can go as granular as they wish, analysing every event detail in full—from shot angles, to distance from goal, x/y coordinates, you name it. You can create your own metrics, custom locations and filter ‘til your heart’s content, before saving everything so you never need to start from scratch again. But critically, as with all our features, it’s got that Twenty3-certified stamp of efficiency and usability running through its veins.

Finally, some words from our very own James Clarke-Reed, a former Brighton analyst and a man who’s better placed than anyone to sum up the virtues of our latest feature:

“The Event Lab truly allows the user to interrogate their data with such focus but with equal ease. The cutting-edge user experience coupled with an unrivalled level of customisation is why this aspect of the Analytics Toolbox is a must-have for any data user in football.”

Sounds good, when can I use it?

While we dot the i’s, cross the t’s, and apply the finishing touches – or as our developers like to call it ‘the annoying designy bits that the product team make us do because they insist micro-UX adds value’ – we’re now ready to arrange demos of the Event Lab for anyone interested.

If you like what you see, we would be delighted to set you up with a trial of the product.