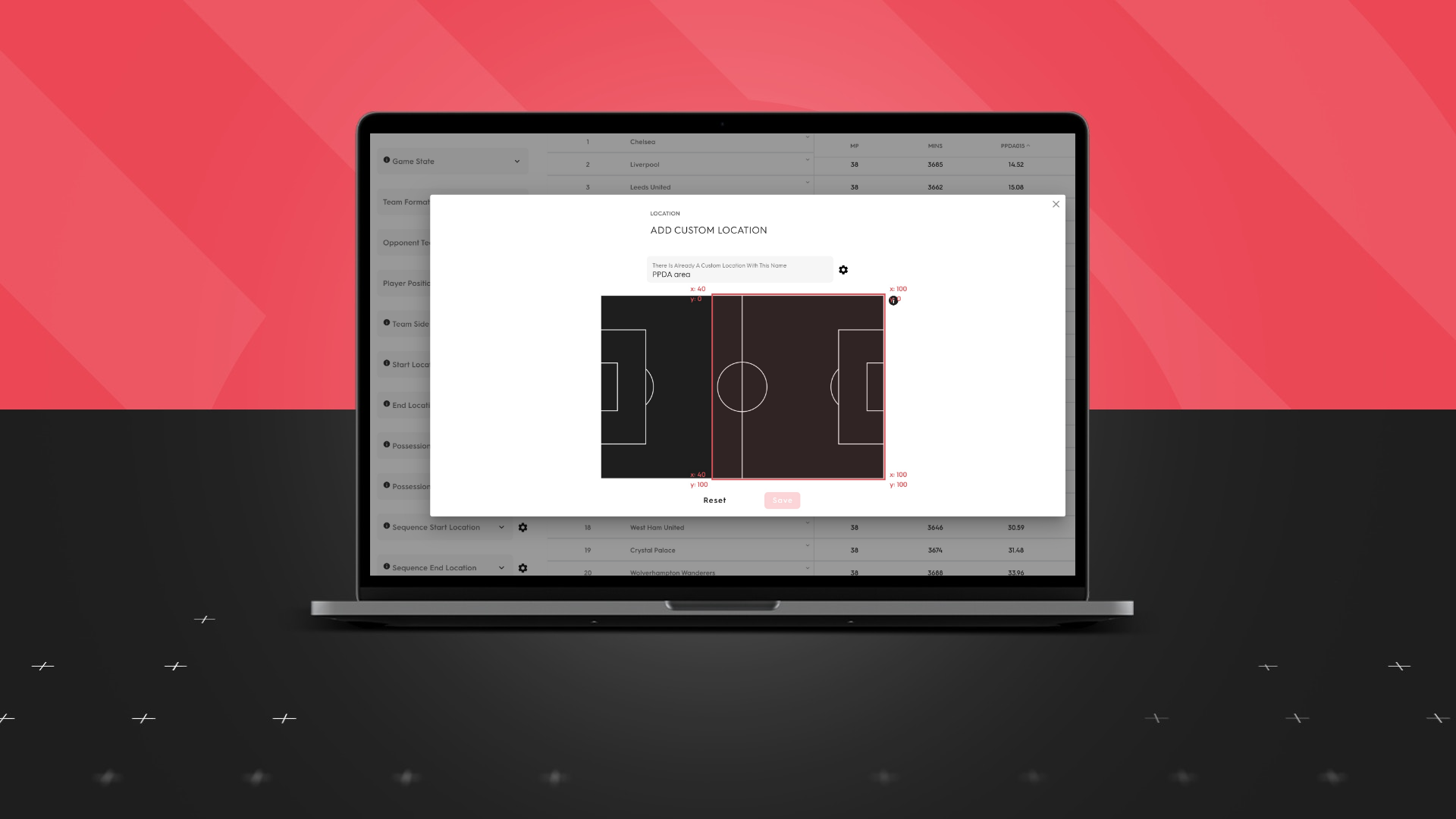 It’s always a good thing, from time to time, to check that your perceptions are backed up by something meaningful. Marcelo Bielsa’s Leeds United are a team whose reputation precedes them by a Yorkshire mile (like a Lancashire mile, but better), particularly the intensity and relentlessness of their pressing. However, just how intense is it in comparison to other teams? Is it sustained throughout matches?

These are questions you might not be able to answer unless you watch a large collection of full matches, but looking at some data can, as ever, provide a helpful snapshot.

Using Twenty3’s new Event Lab, let’s take a look at Leeds’ PPDA (or ‘passes per defensive action’) figure for the first 15 minutes of matches in the Premier League last season. Sure enough, Bielsa’s team sat near the top of the list with the third-most intense figure in the league.

The PPDA number itself might not feel immediately tangible, but we can easily understand it in comparison to the other teams in the league. On average, they weren’t quite as intense as Liverpool or Chelsea, but the difference between those three sides was smaller than that between Leeds and, say, Manchester City.

Now, this might seem like a high-powered statistic to so quickly throw into the top of an article, but it’s simple to put together.

In the original calculation of PPDA (by Colin Trainor), only events in the higher three-fifths of the pitch from the defending team’s point of view are considered. This is because anything that happens closer to the defending team’s goal is probably not pressing per se, but the kind of defending all teams would do once opponents get near the final third.

We’ll be using the area that Trainor’s method uses, but we could alter this if we wanted by making a different custom location filter. For example, we could focus specifically on the left and right flank if there was something of interest that a team was doing differently on either wing.

This would be enough to create PPDA — along with the events for opposition passes and teams’ own defensive actions — but we need to add the ‘first 15 minutes’ filter here too.

Given that we can filter to the opening quarter of an hour, we can look beyond that timespan too. Last season Leeds sure came out of the blocks pressing intensely, but how much did they keep that up as that match wore on?

Let’s duplicate the stat we made and just change the match period filter to go from 15 minutes until 45 minutes. This new stat, which has the shortcode ‘PPDA15HT’ in the screenshot below, shows Leeds drop from third most-intense press in the league to sixth-most.

This is partly a function of teams like Southampton, Brighton, and Manchester United upping the intensity, but you can see by the numbers that Leeds dropped off slightly too.

However, last season’s Leeds certainly didn’t let this decline continue throughout the entirety of the match. Things picked up again for them in the final 15 minutes of matches, but to look at that properly we’re going to need to be a bit more careful.

We all know that teams tend to change approach depending on the score, but this effect will be more pronounced at the end of matches than in the first half. Therefore, instead of simply looking at Leeds’ PPDA figure from the 75th minute onwards, we’re going to create two new stats: one for when they were leading, and one for when they were drawing or losing (i.e. chasing a game).

You can also see there how some teams take a much different approach. Brighton, Aston Villa, and Tottenham all started pressing less energetically last season, but tended to ramp things up as the match progressed. If we order by the ‘when chasing the game late on’ PPDA stat instead of the ‘when leading’ version we get an even more surprising team high up the list.

Last year, Nuno Espírito Santo’s Wolves side were almost a mirror image in pressing intensity from the last 15 minutes, when chasing, compared to at almost any other time and game situation. It’ll be interesting to check the numbers for his Tottenham team this season in a few more games when we have a more comfortably-sized sample of data.

But yes, last season Marcelo Bielsa’s Leeds United were only rivalled by Ralph Hasenhüttl’s Southampton for the consistency of their pressing intensity in-game. The Bielsa team’s reputation is well-deserved.