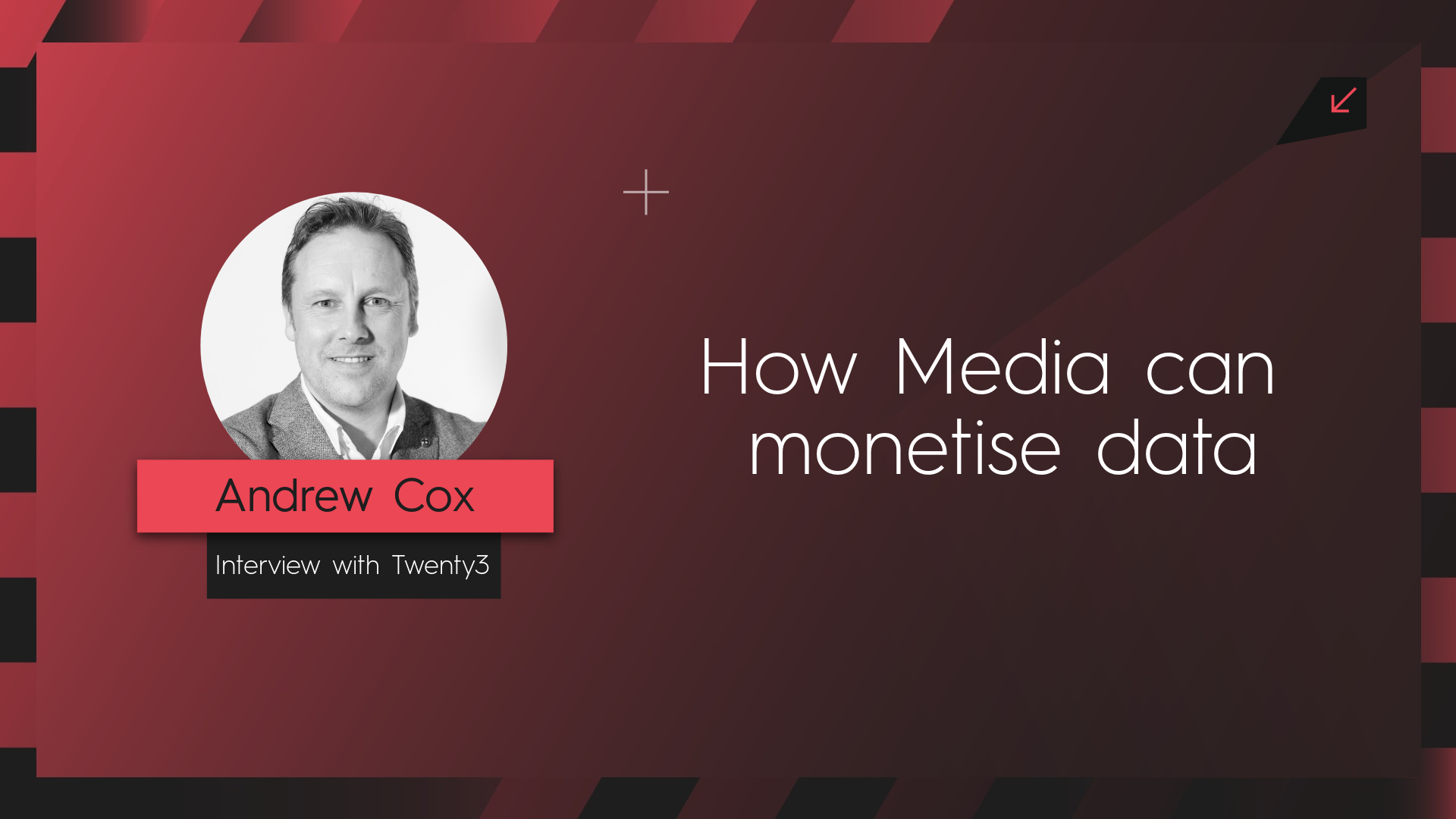 In part one of this series, Andrew Cox, ex-Opta Managing Director, gave us his thoughts on the current relationship between sports media companies and data.

Andrew spoke about how the media, after initially being reluctant to embrace data, have fully adopted it over recent years.

In part two, we focus on how media companies can monetise their data, the opportunities that are often overlooked, and what the future might look like in this particular market sector.

What do Chaokoh and Hublot have in common?

One is a coconut milk brand, the other is a watch manufacturer. Neither have anything to do with football, but both have looked to make the most of the audience that football possesses in the UK. These companies, and many others, understand the value of this particular audience.

Anything to do with the sport is valuable, whether that is written or video content, podcasts or simply posts on social media.

It can be extremely profitable and data has a significant role to play, as Andrew explains:

“Beyond organic growth of likes, page views and eyeballs to advertise to, this content can often be directly commercialised as revenue generative assets.

“At its most primitive, it’s a rare thing to see sports data flashed up on screen without being punctuated by some company logo or other. And, of course, broadcast graphics are just one, albeit highly prized, piece of visual real-estate. When looking across all media platforms it becomes apparent quite how successful data-led content is at attracting sponsors’ budgets.”

You’re almost guaranteed some sort of reaction when something is published. This is perhaps why so many brands have weaved their way into football media already.

Data not only opens the doors to sponsors, but it can also present opportunities for partnerships with companies associated with fantasy or betting.

Andrew details exactly why this is an option:

“The objectivity of data can be an important quality for media in their efforts to be more subtle in signposting commercial partners, where advertorials or even the most generic of articles can benefit from the indisputable nature of statistical fact.

“For example, data that purposefully raises awareness of the likelihood of a particular result, scoreline or goalscorer, irrespective of whether this is a historical quirk or sophisticated predictive algorithm, is always going to be persuasive as a call to action, encouraging lucrative customer referrals into sports betting, fantasy and other emergent gamification channels.”

It isn’t just about making data transactional, though. You can monetise stats in the long-term by producing the best content possible and building up a loyal, engaged audience.

“Media organisations require more content and want to utilise data for this purpose but don’t necessarily have the resource, expertise, time or inclination for the detailed data analysis and associated production that their viewers, users or readers increasingly come to expect. The majority want to be told the stories behind complex data, often in real-time and unique to them, in visually and editorially interesting ways.”

Given the timing of the show, Sky are usually tasked with giving people the last word on the weekend’s action. They have to follow both Match of the Day shows, the round-ups on BT Sport and the coverage already on Sky Sports.

When Jamie Carragher was on an episode of Twenty3’s Laptop Gurus podcast, he revealed that the pressure is on the Monday Night crew to cover something different, to stand out from the crowd, to be innovative.

“We’re trying to think of ideas that haven’t been touched on already so that we aren’t doubling up on analysis. We’re delving a little deeper and, for that, we use data.”

The biggest football analysis show in the UK is reliant on data to be different. Clips are regularly shared across social media and a key component in them is often a statistical breakdown of sorts.

With access to data, you can create unrivalled content. You can create content that is genuinely forward-thinking and insightful; a strategy that can position you as an authoritative voice in the industry. Brands and sponsors want to be associated with that.

Getting your house in order

However, maximising the potential revenue from data is also about getting your house in order and ensuring that the requisite architecture is in place. This then allows multiple stakeholders across a business – from producers to social media editors to journalists – to make sense of this data and bring it to life in interesting, engaging ways.

“Data ingest and storage can be a significant challenge for many traditional media organisations. While costs associated to these activities have declined and outsourcing is now a readily-made business decision, established broadcasters and publishers sit on top of complex, legacy technical architecture and workflows that can be difficult to transition away from. I would suspect that very few would admit to being truly happy that their internal data platforms are fit for purpose in terms of allowing their employees and contributors to fully leverage the sports data they procure and are granted access to.”

As our CEO Simon McMillan explained in a feature piece on our Sports Data Platform (SDP), Twenty3 understand the importance of ensuring multiple stakeholders from within a single business have access to the data they pay for, in order to be able to fully leverage it.

“Clearly, there are many types of users of data in an organisation with varying expertise, using a diverse set of tools, with different tasks to complete. Use-cases may be as diverse as a recruitment team wishing to identify potential players eligible to play in a particular geography; a media team wishing to highlight some standout stats to engage with fans, or a product team wishing to deploy a new front-end environment.

“SDP is able to present data to these users in a variety of different ways: a data scientist can hook up a Jupyter Notebook, an analyst can connect using Tableau and a developer can consume a RESTful API with a built-in authentication layer. All users can, of course, access the platform using Twenty3’s Toolbox.”

It doesn’t end there. Not all data is made equal.

Each company will have their own model and this will differ from its rivals. Users aren’t necessarily allowed to pick and choose what they opt for.

Andrew believes the recent influx of advanced metrics represents an opportunity but it has also muddied the waters a little:

“This problem [of data architecture] is exacerbated given the emergence of new data and derived metrics, as well as the growing number of data providers. With the availability of tracking, physical and biometric data there is fantastic opportunity to combine data in ways that help inform and influence our opinion of how football is being played and understood.”

Instead of products being shaped around what customers want, end users often have to adapt to certain platforms due to the rigidness of many of them.

It happens in the real world. Some companies release products that require customers to buy add-ons exclusively from them. They remove the universality of their items.  They want users to be tied into their business, so much so that the effort to move onto something different is simply not worth the hassle, and this is often the case in the data space.

“Unfortunately for those tasked with this fascinating challenge, football data is not collected or supplied using common standards, even for relatively basic events. Nor is it necessarily in the interests of commercial enterprise to normalise their outputs. Data definitions and statistical counts vary from provider to provider, who database their proprietary information using unique identifiers and technical formats.

“While this represents a significant barrier for any organisation looking to switch suppliers completely, it also makes trying to ‘mix and match’ data from different sources equally complex. Professional football teams’ analytics departments – who ought to be able to derive the greatest benefit from such endeavours – continue to struggle with the data synchronisation challenge and while media clearly enjoy bringing the fruits of similar analysis to their audiences, they are perhaps best advised to let others develop these capabilities and software solutions on their behalf.”

We at Twenty3 recognise this as an issue and it is a big reason as to why we’re data-agnostic – we appreciate people want to make the most of different types of data, but in a consistent, efficient way. That’s why we make sure that our Toolbox product gives customers the same user experience irrespective of which data they opt for.

Buy what you need

You also have to consider that, in a bid to stay competitive, media companies will sign up for packages they deem to be a necessity, without fully realising what it is they’re paying for or how they can extract maximum value from it.

This results in sunk costs and makes generating a meaningful return on investment increasingly difficult.

“I would also question whether some of the data that is being acquired by certain media organisations is an absolute necessity. That might sound strange coming from an advocate of data use but media can be drawn in to making commercially naïve buying decisions.

“This often starts with buying data for competitions that are of negligible interest to their end users. Complexities over the necessity, obligation and value in official data (as opposed to unofficial data) can also catch folks out.

“From there, lower latency and granularity of detail generally increases licensing fees, as does metadata associated to the events being captured, such as positional coordinates or timecodes.  Unless the acquired data is being deployed for automated production, visualised beyond a long list of statistics or analysed to find unique insights, then the reality is these are inefficiencies in purchasing.”

Given our position within the data ecosystem, Twenty3 try to help Media organisations navigate these issues, by understanding what their objectives and priorities are, before then advising on what data they actually need and also helping to negotiate these deals with the providers in question.

“While the ‘extras’ are often commercially and technically packaged in ways that are difficult to partition from core data that is actually needed, buyers can also have unrealistic expectations in terms of what they will be able to accomplish with the data that they license. Procurement professionals have started to put greater scrutiny on sellers (and buyers) to justify increasing fees (and budgets) and there is growing flexibility and technical ‘unbundling’ of data points by suppliers.

“However, the reality is that sports data remains a relatively juvenile industry and buying decisions in media are often specific to solitary-use cases or budget holders, as opposed to pooling requirements across what are increasingly multidisciplinary and multiplatform organisations.”

Clearly, the scope is there for media organisations to monetise data in a variety of different ways. Ultimately, it is about what each company wants from their data investments.

In the final part of this series with Andrew, we’ll focus on efficiency and how Media companies can extract maximum value from data.