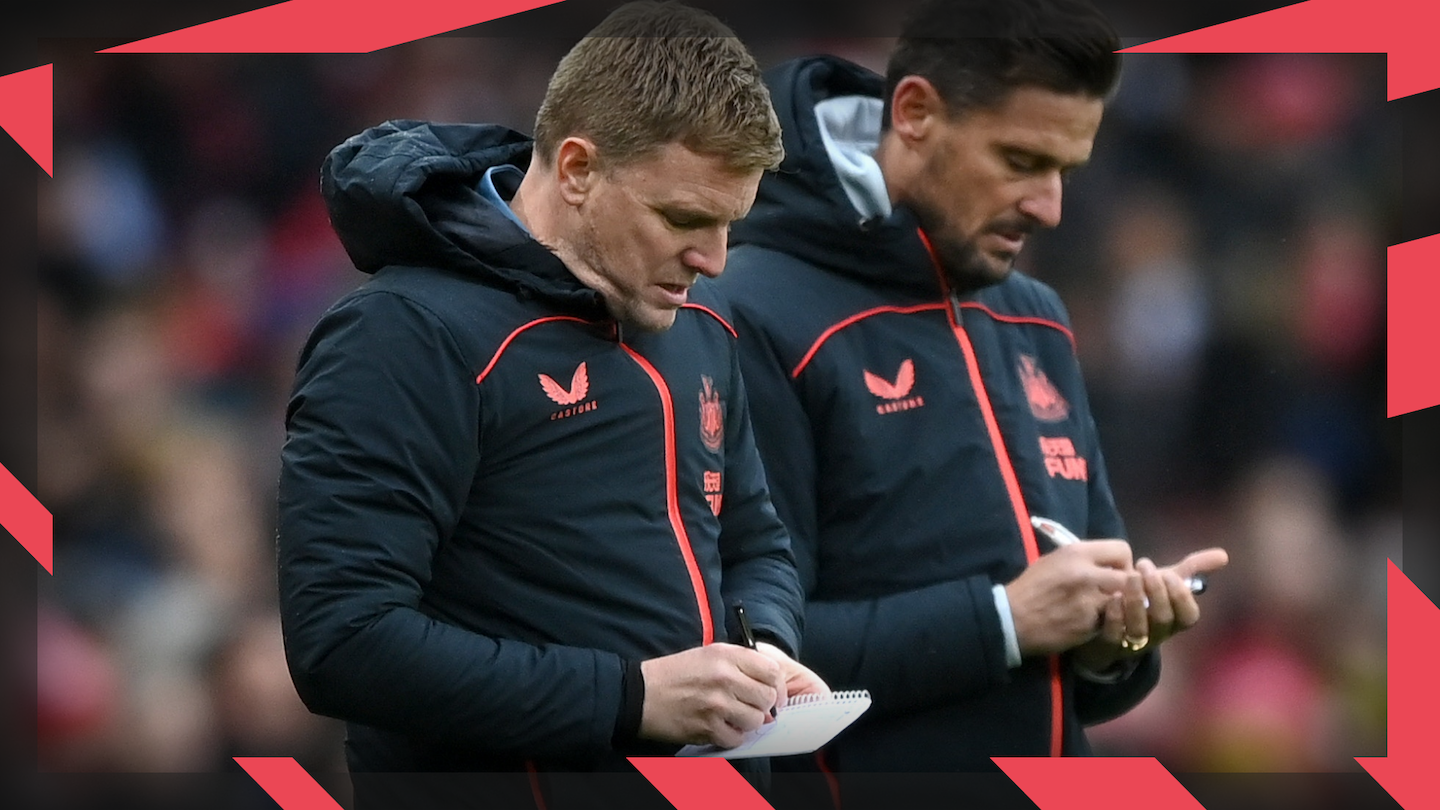 Few teams in world football have the finances to have a transfer window that would not look out of place in Football Manager. Following the takeover in October, Newcastle United are now one of these exclusive clubs.

The Magpies have the richest owners in the world and no player is off bounds. In the long-term, the idea will likely be to have the next Kylian Mbappé plying their trade at St James’ Park. The short-term project revolves around avoiding relegation.

It is safe to assume the likes of Erling Haaland, Jude Bellingham, Federico Chiesa and Frenkie de Jong won’t want to be involved in a scrap at the foot of the Premier League table, with no assurances the club will stay up, for any amount of money.

So, the January transfer window will see Eddie Howe and his team bring in reinforcements. These players will help them climb the table and they should suit the style of play the new manager is looking to implement.

With this in mind, we’ve decided to use all of the products available in the Analytics Toolbox to piece together a transfer shortlist for Newcastle.

The idea is for this to be as realistic as possible. We’ve looked at the players linked with a move, profiled them and then used our Discover tool to find alternatives. First up, a look at centre-backs.

Howe’s men have been linked with moves for James Tarkowski and Sven Botman. The two defenders are from different leagues, have different age profiles and play on different sides of the defence. The Lille man averages twice as many passes and completes more than the Burnley stalwart, too.

They do share some similarities though, namely their aerial dominance. Over the last two seasons, Tarkowski has involved himself in 7.1 aerial duels per 90, winning 62%. Botman has attempted fewer (5.29), but won a higher percentage (67%).

When selecting the key stats to identify potential targets, we included aerial duels, passes, passing accuracy and fouls committed. Howe’s teams play football, so any new centre-back needs to be adept with the ball at his feet and comfortable seeing a significant amount of possession, as well as being aerially dominant.

The ‘fouls committed’ metric isn’t a deal-breaker, but you don’t want someone who dives in a lot and gives away silly free-kicks in dangerous areas.

Jules Koundé and Ruben Dias ranked highly, but neither player is a viable option for Newcastle right now. High up the list, however, were Nayef Aguerd (an 80% match) and Bremer (a 78% match) who both fitted nicely within our criteria. 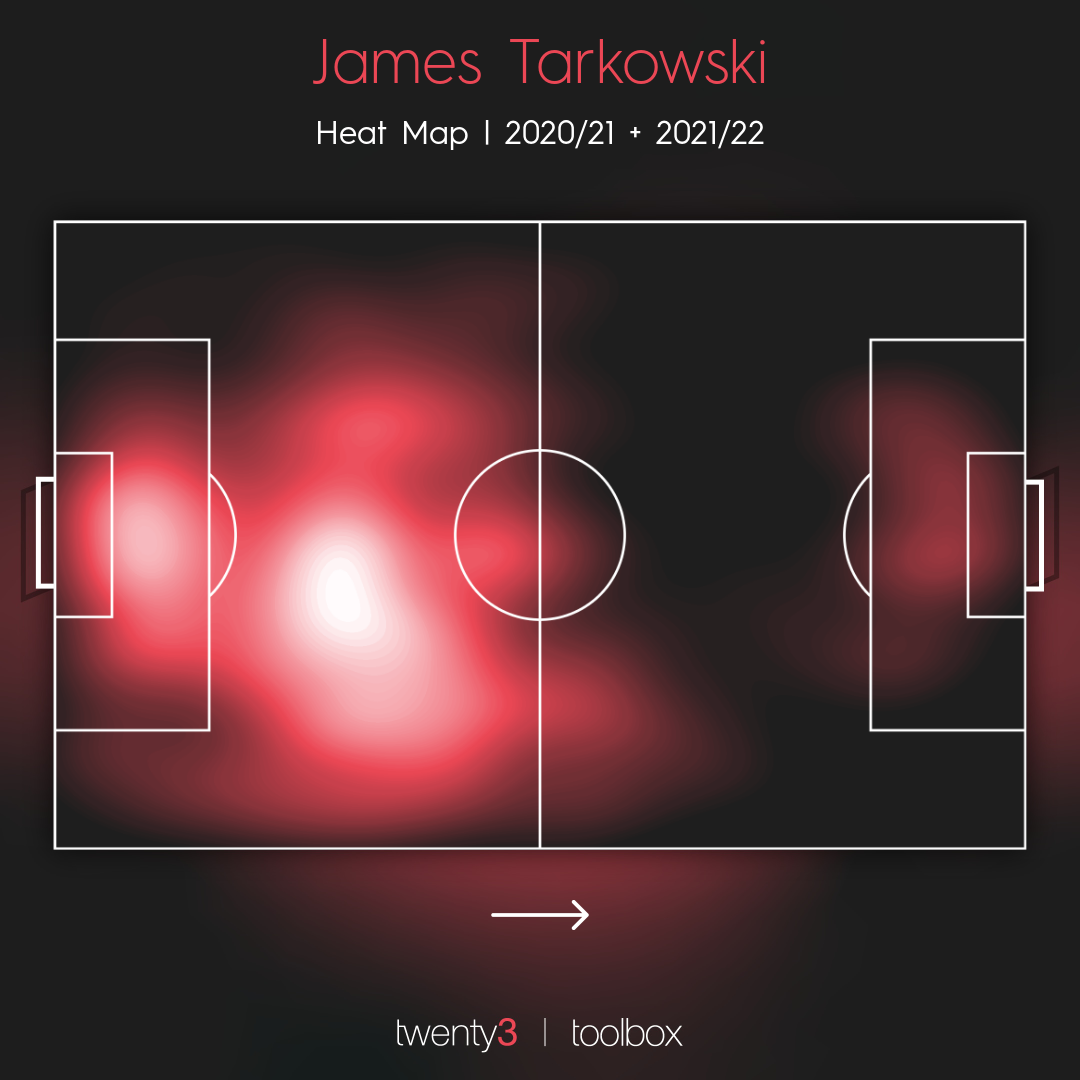 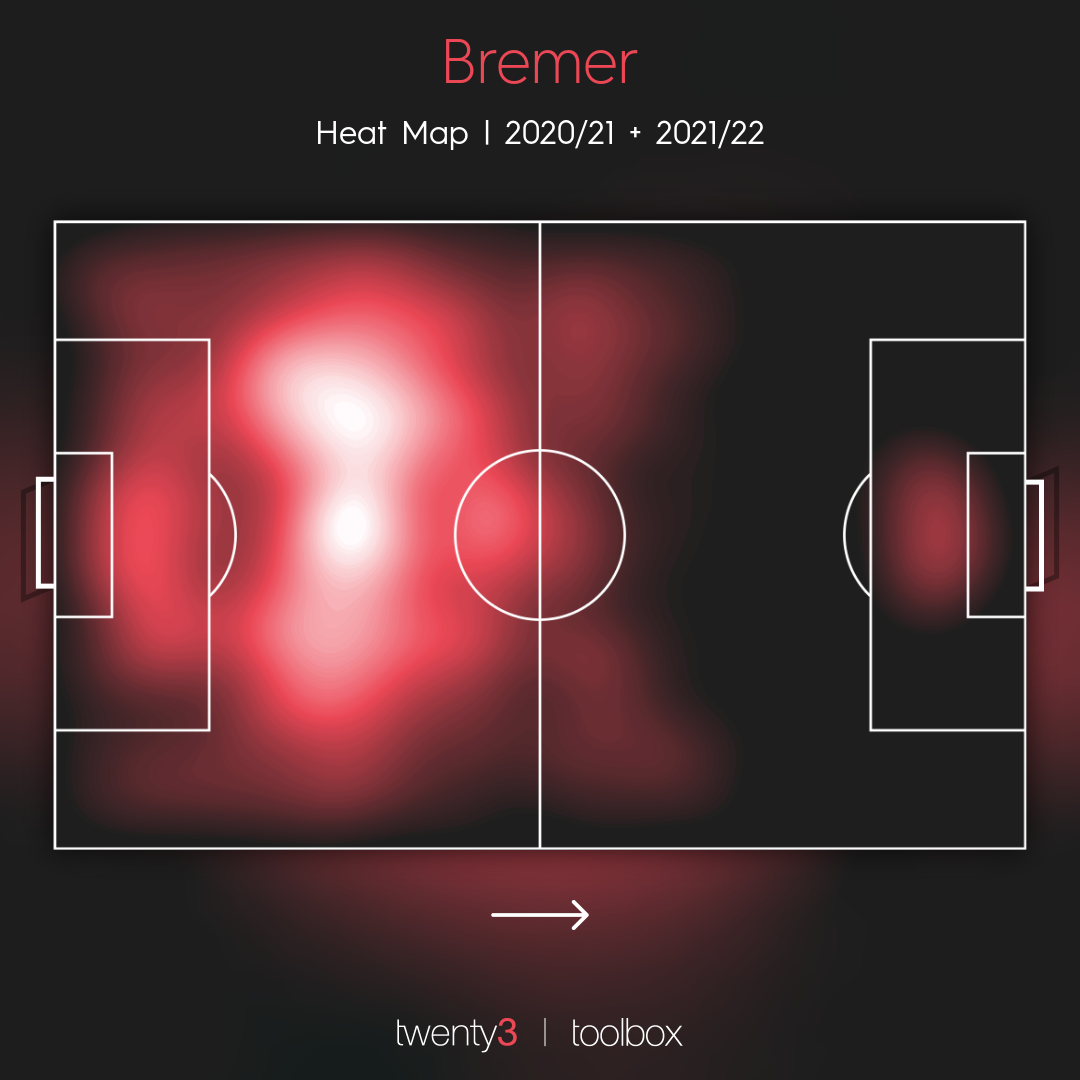 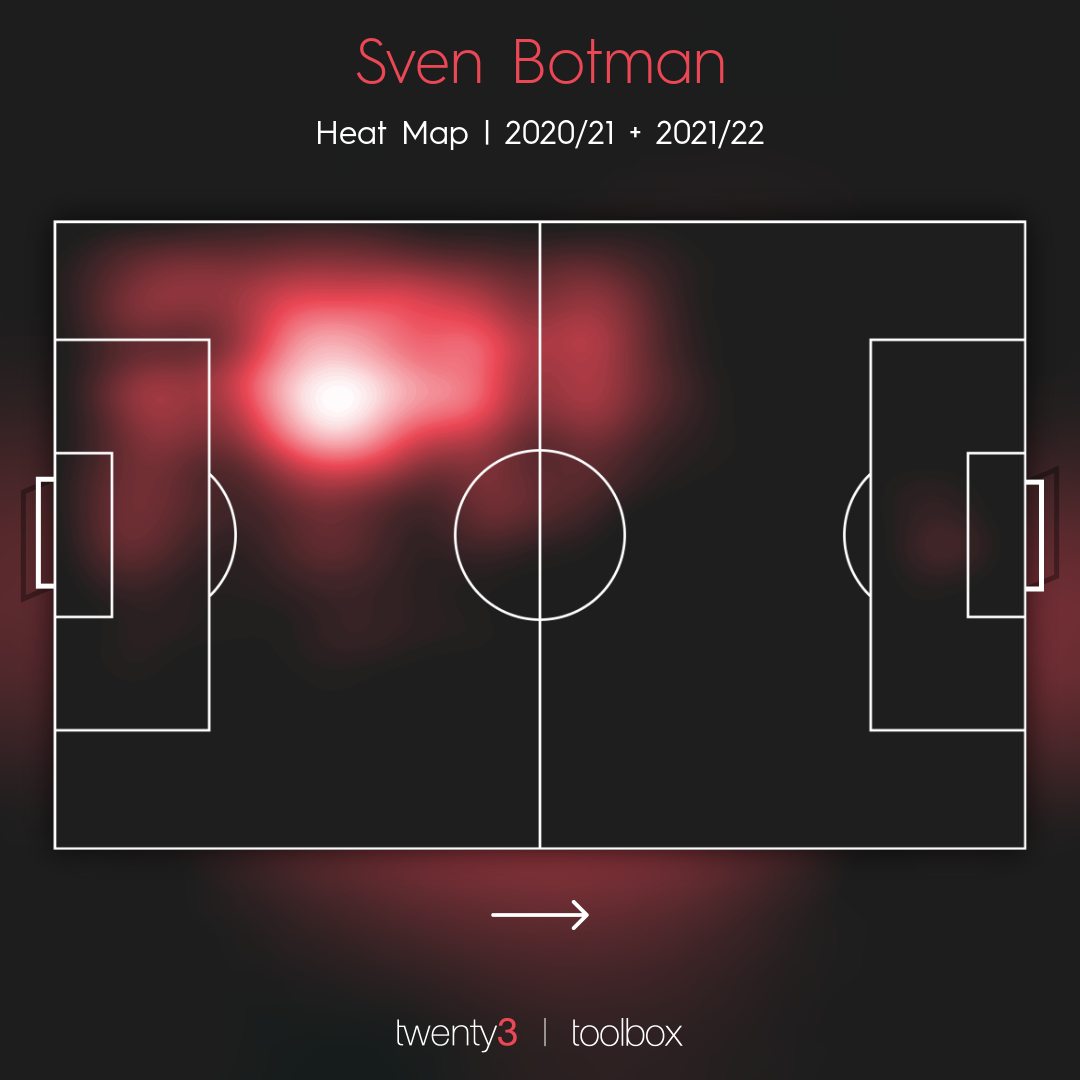 Scroll through the above carousel to view heat maps

He is a left-sided centre-back who posts eerily similar numbers to Botman in the key areas we’re looking at. While the Dutchman is believed to be valued at £40million and has previously been named as a Spurs and Liverpool transfer target, Aguerd has been going under the radar in what is quickly becoming one of the most exciting teams in Europe, with Rennes having the likes of Jérémy Doku, Kamaldeen Sulemana, Loïc Badé and Lovro Majer at their disposal.

Teams climb the table by spending wisely. Aguerd is a value for money option and perhaps even better suited to the Premier League due to the extra bit of pace he possesses.

Bremer is closer to Tarkowski. The Torino centre-back attempts more aerial duels than Aguerd and Botman but attempts fewer passes.

He has the pace to play in a high defensive line and, being Brazilian, you know he’s not out of sorts when in possession. The only thing to note with him is that he’s primarily played in a back three during his time with Torino.

That impacts defensive numbers and he’d likely be far more exposed in a traditional back four. That is definitely something to consider, but, along with Aguerd, he remains one of the standouts on the list.

According to multiple reports, the Magpies are keeping tabs on Kieran Trippier and Max Aarons as they look to bolster their full-back options.

Again, just like with the centre-back options, these two profile differently, as illustrated in the radar above. Aarons is more of a ball-carrier and has attempted, on average, close to five dribbles per 90 since the start of the 2020/21 campaign.

Trippier, on the other hand, is much more of a ball-player. Few full-backs in the world attempt more passes than the Atlético Madrid man and he’s one of the most progressive right-backs, attempting almost eight passes into the final third on a per 90 basis.

Different playing profiles but it is safe to say that both want to get the ball forward.

The England international, who turned 31 in September, is believed to be valued at £25million, while Norwich City are rumoured to want £35million for their right-back.

Newcastle have that sort of money, but do they really need to spend it?

For example, Hugo Siquet has agreed to join SC Freiburg for €4.5million. The 19-year-old has shades of Trent Alexander-Arnold to his style and would’ve been a shrewd addition for the Magpies.

Another possibility might be Jonathan Clauss, the RC Lens full-back has been linked with a host of big name clubs but remains in Ligue 1. The 28-year-old is a menace down the right flank and is a cross between Trippier and Aarons.

He carries the ball – attempting over two dribbles – but he’s also responsible for creating opportunities – attempting in excess of five crosses per 90. His current deal expires in 2023 meaning there is definitely a deal to be done for the right fee.

Newcastle have been named as a club interested in João Félix.

The Atleti forward is reportedly interested in leaving the LaLiga outfit during the January transfer window to find a team better suited to his strengths. According to AS, the Magpies have enquired along with Liverpool, Manchester United and Arsenal.

This would be a statement signing for Howe, but it isn’t necessarily one they need right now.

Félix is a mercurial talent, but injuries have plagued him since the switch to Los Rojiblancos and he is far from a guaranteed goalscorer. He would have to adapt to a new league and a new team, too. For the prices being bandied about, there are better options.

Another name on Newcastle’s wishlist is apparently Jesse Lingard. The Manchester United attacker enjoyed a prolific spell on loan with West Ham during the latter half of last season and has it in him to hit those heights again in the right system.

However, the Toon Army parted with £25million in the summer to sign Joe Willock after a similarily hot streak while on loan. He is yet to repeat that this time around but the 22-year-old has shown that he can thrive in the right environment. Why would you sign someone seven-years his senior with a near identical profile?

During his time at Bournemouth, Howe enjoyed success using a two-man strikeforce. He could look to repeat the trick at St James’ Park.

One possibility is a man being linked with Barcleona.

The 23-year-old has scored 14 goals in 15 Swiss Super League matches. The 6ft1 forward is already having his most prolific season to date in Europe and we’re still only in December.

The robust penalty box poacher could be the perfect foil for Callum Wilson. The underlying numbers tally with his actual output. He’s in the form of his life and that confidence could make the transition from Switzerland to England a seamless one.