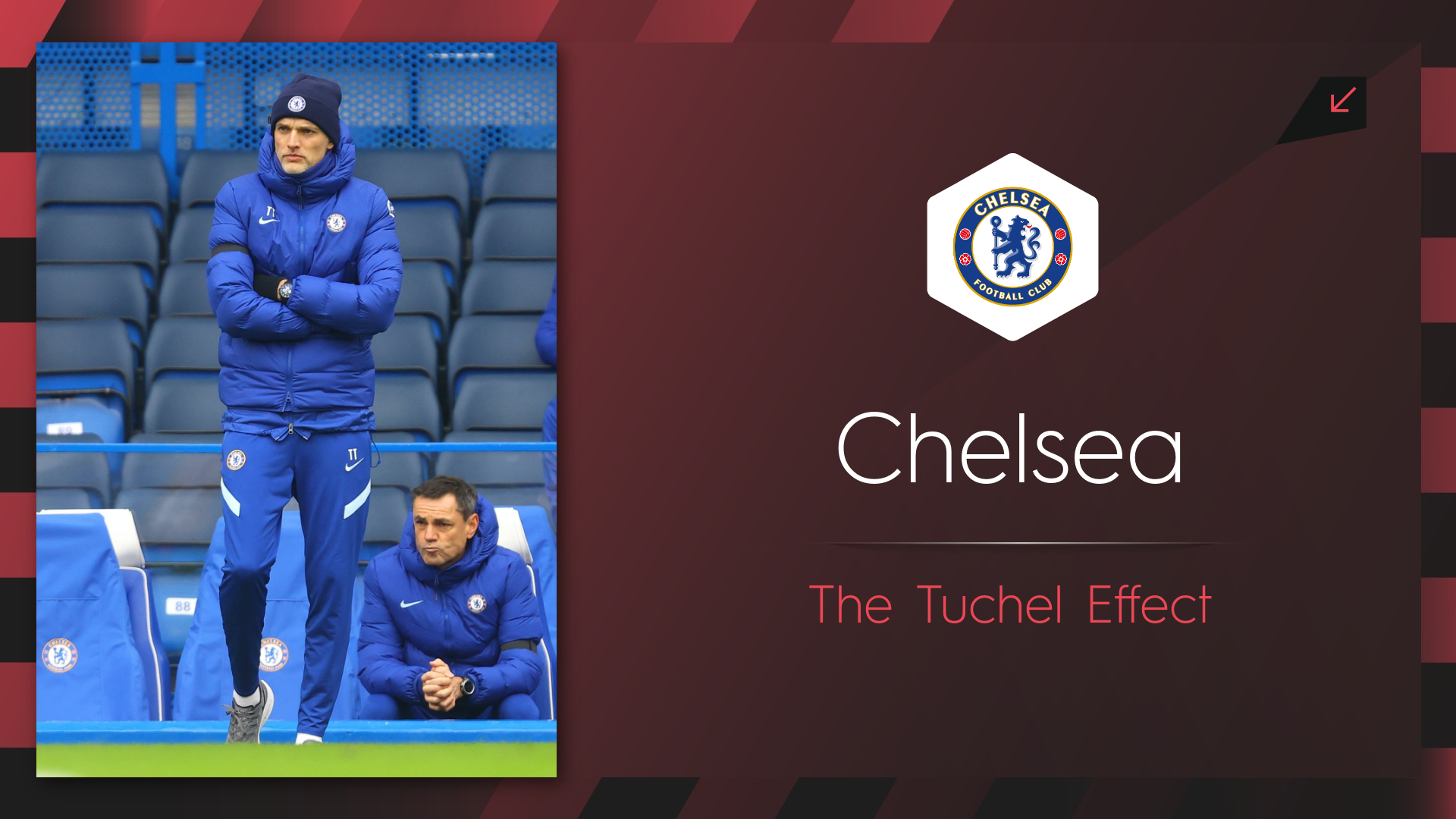 The Blues have won ten of their 14 matches under the German tactician and this form has seen them climb into the Premier League top four, claim a place in the FA Cup semi-final and progress into the quarter-finals of the Champions League.

Remarkably, Chelsea have only conceded two goals under Tuchel and now boast the second-best defensive record in the Premier League behind leaders Manchester City. For further context, the Blues were breached on 16 occasions during Frank Lampard’s final 14 matches in charge in all competitions.

The 2018/19 Europa League winners weren’t ever porous under Lampard, but the defensive resilience they’re showing under Tuchel is something else entirely.

Before his appointment, Chelsea’s expected goals against (xGA) average was 0.98 and their post-shot xGA average was 1.02 in the Premier League. Since the former PSG boss made the move, however, these figures have dropped to 0.47 and 0.19 respectively.

It is no fluke they’ve only conceded two goals. They’re completely nullifying the opposition. Adam Newson, the Chelsea correspondent for football.london, has a theory as to why this is now the case.

“Tuchel wants his side to control games through possession, to dominate with the ball. And it’s something they’ve largely achieved in every match he’s overseen.”

Under the one-time BVB manager, Chelsea do see more of the ball. On average, they have 60% possession in the Premier League compared to the 55% under Lampard. As a result, they’re attempting 60 more passes on a per 90 basis. Interestingly, they’re playing fewer long passes (43 down from 48) and attempting fewer crosses (15 down from 18).

These differences may seem minimal but over a 38-game season, it is 190 fewer long passes and 114 fewer crosses. Both of these actions result in turnovers. It’s obvious Tuchel wants his side to keep the ball.

They’re also much more aggressive in regaining possession. In fact, when Lampard was at the helm, the opposition averaged close to eight sequences of ten or more passes. That figure now stands at 5.7 per 90.

Chelsea disrupt opponents. They’re doing this by getting the ball back much quicker. Their passes per defensive action (PPDA) numbers now stand at 9.64 vs. 10.6 prior to the German’s arrival.

As you can see in the defensive solidity map, Chelsea now engage the opposition in different areas of the pitch. Under Lampard, they’d engage high up in each half of the pitch. Under Tuchel, they’re much more compact with the focus being a little deeper. Their approach is more of a mid-to-high one whereas Lampard had his team pressing high and then dropping off.

Tuchel’s approach is more relentless and explains why Chelsea’s PPDA is better. They’re now engaging the opposition in more zones, winning the ball back quicker and then using the possession to sustain attacks.

The new system being used definitely lends itself to this, as detailed by Newson: “Tuchel’s side attack with five players and defend with five players. As a result, it’s been difficult for opponents to hurt the Blues in transitional situations because potential avenues are always closed off quickly.”

The five and five structure is fairly evident in the average touch map. It is very much a back three with a double pivot ahead of them shoring things up defensively with the front three being flanked by high wing-backs.

This switch has paid dividends, with Chelsea allowing just one shot in their six-yard box in ten Premier League matches.

This exceptional defensive record has eased the burden on the forward line. Chelsea may not be as effective in the final third – their xG under Tuchel is down to 1.38 from 1.77 when Lampard was manager – but the xG difference (xG for minus xG against) is greater. Prior to the hiring of the 47-year-old, the xG difference was 0.79. It is now 0.92.

Tuchel’s Chelsea are winning most games 2-0 when looking at the underlying numbers. Under Lampard, it was closer to 2-1 and when scorelines are that close, the randomness of football can play a part.

Tuchel has almost stripped away variance in the matches and this is why Chelsea look so controlled and ruthless. There’s a perfect mix of ability and efficiency within the team and the tactics. It’s why this form can become the norm.