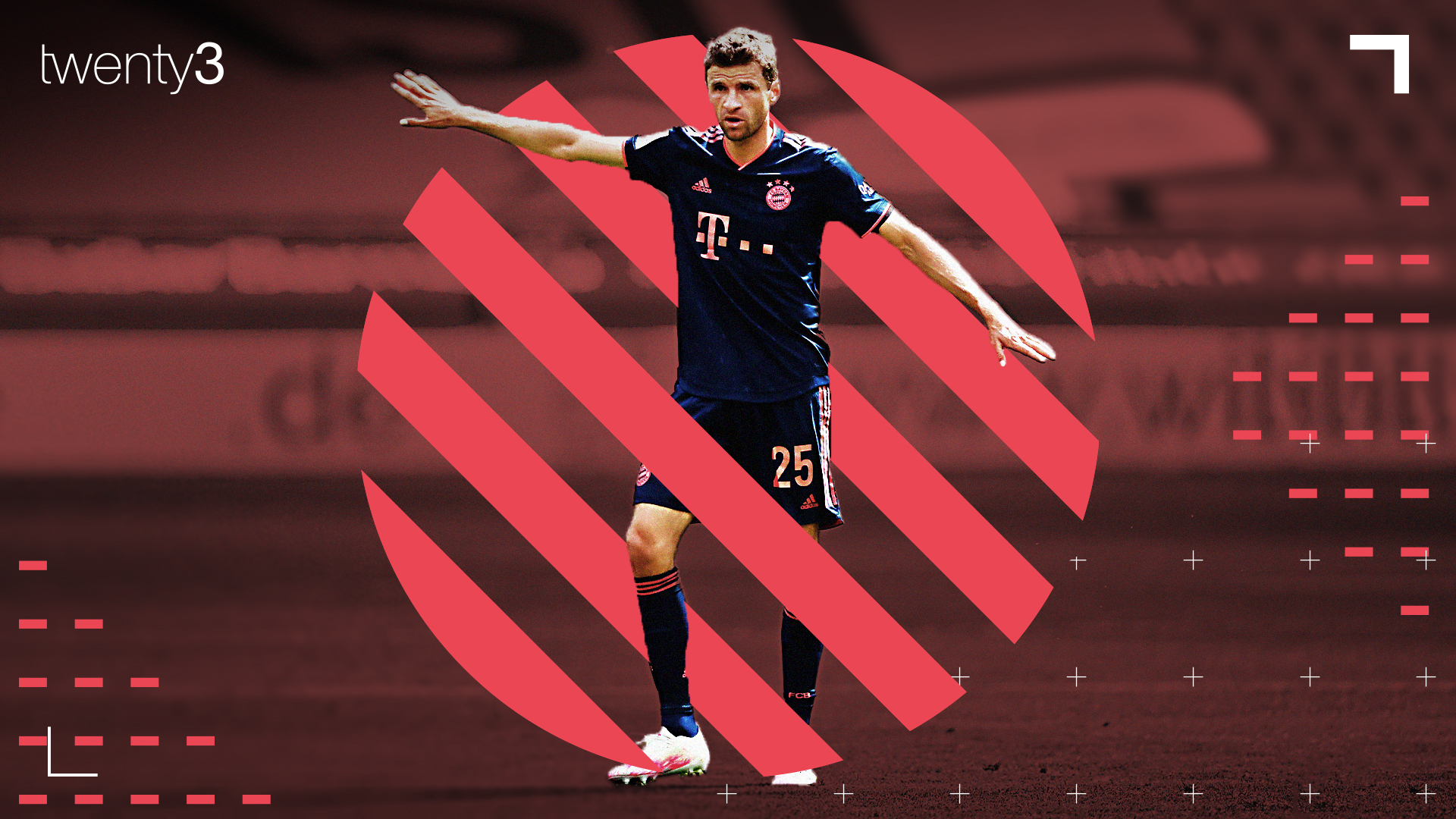 It’s ironic that Thomas Müller, a man who made a position famous, is now thriving in a role usually associated with Kevin De Bruyne.

The Bayern Munich academy graduate is, and always has been, a Raumdeuter. In English, it roughly translates as an interpreter of space. Teams didn’t know how to handle the German or his movement, and they couldn’t stop him as a goal threat.

During the 2015/16 campaign, Müller scored a career-high 32 goals in all competitions, 20 of which arrived in the Bundesliga.

People might’ve fixated on his goal return, and rightly so, but his creative numbers were just as impressive. In seven of his 11 seasons with the Bavaria-based club, Müller has finished with double figures in assists.

However, his performances as Robert Lewandowski’s sidekick this season have seen his stock rise. The Bayern No.9 has notched 30 times in 28 Bundesliga appearances this term but it’s Müller’s record of 20 assists in just 1,992 minutes that have got people talking.

In doing so, he’s equalled De Bruyne’s record for the most assists in a Bundesliga season, a feat the Belgian playmaker managed in 2014/15 with Wolfsburg.

Müller is peerless across Europe in this metric. Jadon Sancho and De Bruyne trail him on 16 each but both have more minutes under their belts.

The man who seemed to do his best work away from the spotlight is now the centre of attention. But what’s changed for Bayern’s No.25 to become the creative hub he now is?

Using Twenty3’s Content Toolbox, we’re able to break Müller’s game down into sections and visualise what might have triggered this transformation.

The graphic above shows a selection of Müller’s numbers from last season on a per 90 minutes basis. He underperformed in terms of goals but as a creator, his numbers were on par. In other words, his team-mates converted the chances he created at a consistent rate.

It’s only when comparing his numbers to this season that you start to see more of a complete picture. This time around, his goal return is bang on the money. His expected assists (xA) per 90 average has risen from 0.39 to 0.53, showing he’s now more dangerous as a creator than ever before.

But the real difference is the finishing ability of his team-mates. The likes of Lewandowski, Serge Gnabry and Philippe Coutinho are all finishing what could be described as difficult chances. It’s worth noting that expected goal metrics are usually a little harsher on headers and volleys. By that, we mean that these chances aren’t valued as highly.

So while it looks as though Müller is outperforming his xA average, this will be impacted by the sort of chances he’s creating and where these opportunities originate from.

Last season, Müller was attempting more passes in the final quarter of the pitch. In theory, the more involved he is in that area, the more threatening he is. But in practice, it doesn’t always work like that. Penalty areas are sometimes too busy and crosses are blocked or cleared.

This campaign, however, has seen Müller occupy deeper positions. He’s already attempted, and completed, more passes in the third quarter of the pitch than he managed during the 2018/19 term. The origin point of his passes changes everything. It changes the threat entirely.

De Bruyne dominates this part of the pitch for Manchester City and it’s why he’s such a creative maestro.

Müller is now claiming the same area of the pitch and it has seen his creative numbers swell.

It’s only a matter of time before he breaks the Belgian’s very own Bundesliga record.