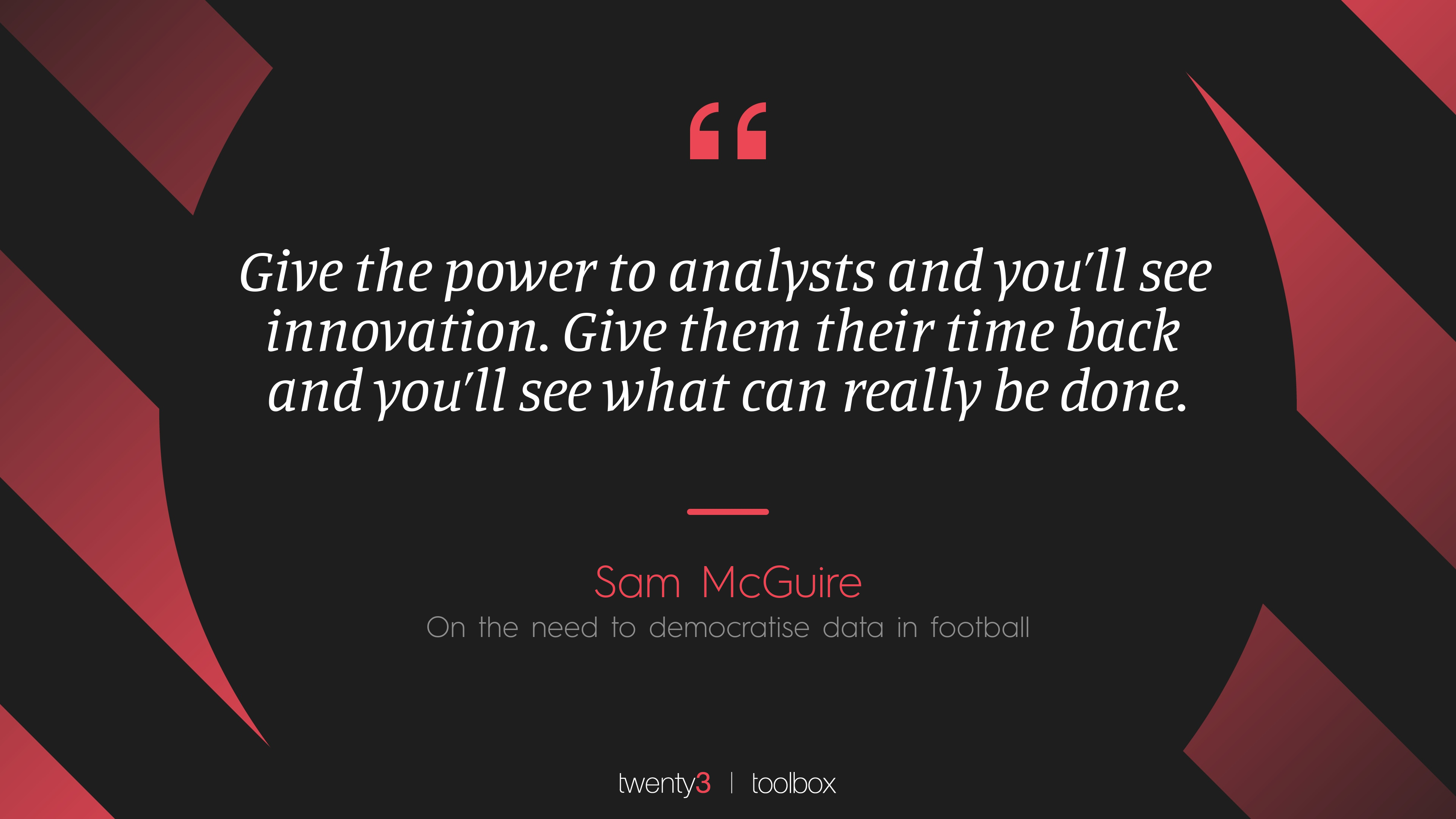 Carl Sandburg once said: “Time is the coin of your life.”

In most walks of life, the modern world is geared towards giving people their time back because of how precious it is.

There are companies that now do your shopping, no matter how big or small the order is. Similarly, meal prep businesses are more popular than ever before, with people no longer wanting to sacrifice the limited free time they may have to prepare and cook meals.

You can now also pre-order drinks to pick up, meaning queues can be bypassed. This may only save a few minutes here and there but over the entirety of a year, it allows you to claw hours back. It all adds up.

Yet despite efforts being made across various sectors, the football data one is yet to broach this particular subject of freeing people up.

A regular complaint from analysts that we speak to is that there aren’t enough hours in the day to get everything done. Fearing burnout, many end up finding alternative careers. This isn’t just a problem for analysts though. Anyone involved in football data faces the same problems.

In a talk for Training Ground Guru, David Perdomo Meza, Head of Data Science and Engineering at Twenty3, focused on the idea that data needs to be democratised.

Why, I hear you ask?

As things stand, the idea seems to be that a select few employees can turn the raw data licensed from providers into actionable pieces of intel for various departments within a club. As long as this is the case, there is no real need to explore how to make this sort of data more accessible.

However, with the scope of data increasing by the year, this sort of set-up just does not seem sustainable or even sensible.

Within David’s talk, he referenced a section from an article written by Simon McMillan, Twenty3’s CEO.

“The mythical role of the ‘Data Scientist’ is someone who has a vast array of relevant skills that all add up to an almost magical capability to produce winning answers from raw data. The truth is, to create an effective data pipeline, you really need cloud computing experts, database admins, developers, data engineers, data scientists and subject matter experts to get it right. It’s unlikely that even the most sophisticated organisations will have expert level capability in each of these areas.”

As David alluded to, if an analyst is spending time writing code for raw data to be manipulated and usable, they aren’t spending time working on, well, everything else.

An analyst is employed to find patterns and themes in data, they aren’t there to clean it. Having to do the latter, for example, takes away from the former and they are then playing catch-up.

Ultimately, the reason for this lies with the data providers, as David highlighted.

“There’s really no incentive for providers themselves to help you integrate easily with the tools from other providers in the sense that providers want to capture the totality of your budget, really. There isn’t a huge incentive for them to interact with other tools.”

To get certain data points, clubs have to sign up for bundles and then sift through it all. It was purposely difficult to blend data points from different providers and, as a result, analysts would have to build models manually to extract the information they wanted from it.

The fear was that they would only get a small percentage of a club’s available budget and a competitor would come out on top. But why does that actually matter? Should it?

If you’d like to learn more about our products or the variety of services we offer, and how they might be able to help you, don’t hesitate to get in touch.