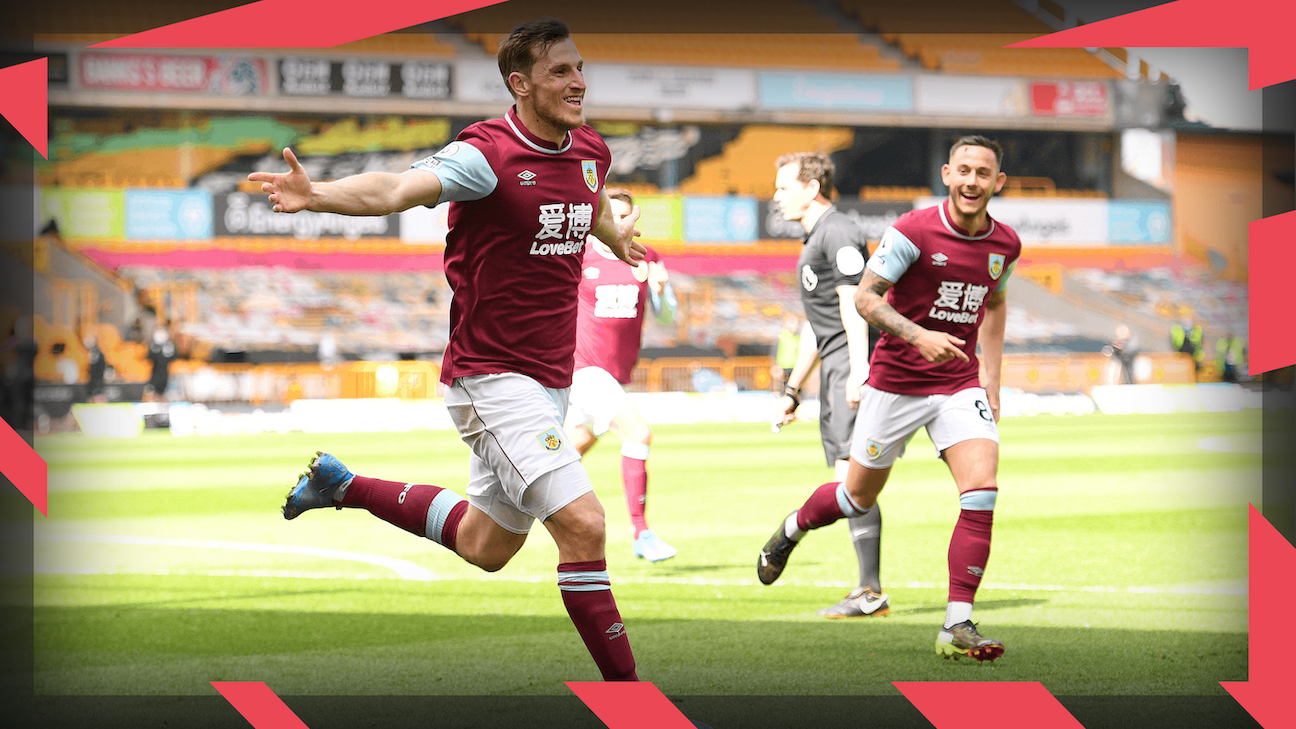 For a fourth successive season, Chris Wood has hit double figures in the Premier League. The 29-year-old netted a treble in the 4-0 win over Wolves to make it six in his last six outings and ten for the campaign.

The Burnley No.9 has timed his run of form to perfection, just as it appeared as though Sean Dyche’s side were tinkering on the brink of a relegation battle.

Now, however, they find themselves nine points clear of Fulham with five games left to play. It’d take a remarkable turn of events for the Clarets to find themselves in the Championship next season.

To stay in the Premier League, you need a reliable goalscorer. In Wood, Burnley have just that. The New Zealand international is key to the way Dyche’s team plays.

They rank first over a four-season period for long passes attempted and they’re in the top 10 for crosses and passes into the final third attempted. For this direct approach to work, they need a focal point in attack. A player who can compete against defenders in what is one of the most physically dominant leagues in the world.

As the graphic above shows, Wood can hold his own.

He’s in the top four for aerial duels attempted and he’s ranked 14th for aerial duels won over the same period. Though that might seem a bit of a drop off, just being able to compete and disrupt the opposition is often enough. His team-mates can pick up the second balls and Burnley can build that way.

Along with scoring goals, Wood is in the team to ensure the Clarets can get a foothold in the game in the final third. They aren’t the sort of team to build through midfield so need their strikers to hold the ball up and bring others into play.

It is evident when looking at the passes received and made networks. Though he primarily operates in central areas, Wood regularly drops into the channels to offer an option and to link with team-mates. He’s invaluable to the way Burnley build and sustain their attacks.

Not only is he involved in the build up, but he’s often the one finishing off team moves. Just as he did over the weekend.

Following the 4-0 win over Wolves, Dyche praised his forward: “There are still things that he can improve, with his hold up play and keeping hold of the ball. But there are certain things in football that you can’t coach and he finds a way of finding a chance.

“The reason I signed him is because he finds a way of being in the right place at the right time, and I actually think we have a clutch of strikers capable of that. The hardest role on the pitch is centre forward, and I know how difficult it is because I used to play at centre half and I made damn sure it was difficult, but Woody finds a way of scoring goals.”

When looking at Wood’s goal map, you’d have to agree with Dyche’s assessment that he’s got a knack for being in the right place at the right time. He’s scored just one goal outside of the penalty area since his arrival at Turf Moor and the majority have all been high value chances.

The service has to be spot on, but the 29-year-old’s ability to know when and where to gamble is one of the main reasons his goal return is as impressive as it is.

Only nine players in the Premier League can boast a better record since the start of 2017/18. Furthermore, the former Leeds United man isn’t playing for one of the league’s highest scorers. He’s making the most of the chances carved out for him. Burnley is perfect for him and he’s perfect for them.

If you think the Toolbox could help your organisation, you can request a demo here.