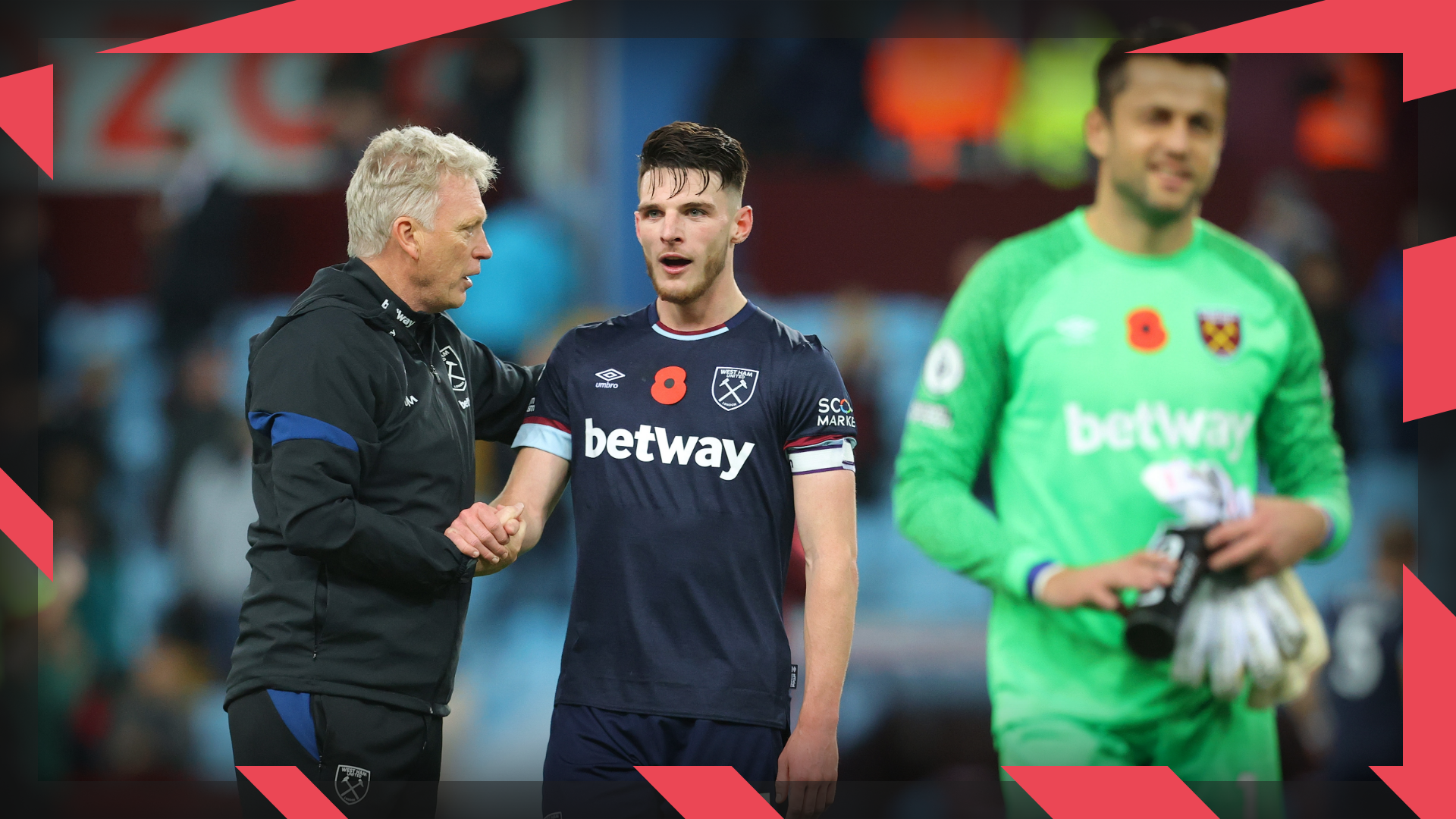 West Ham United’s 4-1 win over Aston Villa put them level on points with reigning champions Manchester City in fourth and just five points off of leaders Chelsea. David Moyes’ men have won five on the bounce across all competitions and eight of their last ten outings have ended in success for the Hammers.

Not only are they showing that last season’s sixth-place finish was no fluke, but they’re also answering – rather emphatically – those who wondered whether their squad could cope with the rigours of Europa League football. They are top of their group having taken maximum points from their three matches.

It is a big week for West Ham.

Victory in the Europa League in their clash against Genk will see them advance to the next stage of the competition. They then welcome title hopefuls Liverpool to London on Sunday.

The Manchester derby is the day before and if City win, West Ham can go six points clear of Manchester United. If the Red Devils win, all three points for Moyes’ side takes them above both Pep Guardiola’s men and Liverpool to put them into second. It isn’t a season-defining week, but the opportunity is there to make two big statements.

So how have they done it? How have West Ham gone from finishing 16th in 2019/20, to being one of those looking to gatecrash the top four?

For starters, they have done fairly well with their recruitment. It hasn’t been flawless, but few teams have a 100% record. For example, Sébastien Haller and Albian Ajeti arrived in the summer of 2019 and both have since departed for a loss. However, the Hammers also signed Pablo Fornals in the same window. They were then fairly active in the winter window, bringing in Jarrod Bowen from Hull City and Tomáš Souček on loan from Slavia Prague.

All three of these players are now key cogs for Moyes.

In the summer of 2020, Soucek joined on a permanent basis along with compatriot Vladimír Coufal. The Hammers also managed to snare the highly-rated Saïd Benrahma away from Brentford. Again, both of these permanent signings are now highly influential for West Ham.

They splashed the cash again during the off-season to bring in Kurt Zouma and Nikola Vlašić on permanent deals while Alphonse Areola and Alex Král joined on loan.

West Ham have upgraded their squad throughout and this has allowed Moyes to put his stamp on them.

Granted, we’re only looking at a ten-game sample size this term, but a lot of their averages are up on last season. They are attempting more shots but they’re also creating better opportunities, many of which star man Michail Antonio is invariably gobbling up.

The striker’s 6 goals from an xG of 5.91 screams sustainability and is an indication that rather than ‘running hot’, the Jamaican international is simply taking the chances you’d expect him to.

West Ham now have an expected goals (xG) average of 2 per 90 and rank second in the league for this metric with only Liverpool (2.37) able to better it.

When looking at their shot map (above) you see they are creating a number of high-value efforts in central areas – just between the penalty spot and the six-yard line. Even their long-distance attempts are from fairly central zones. Their attacks are funnelled into those parts and it is a sign of a well-coached team who know exactly what they are being tasked with.

They are attempting significantly more passes and this is allowing them to control matches. Previously, they had been something of a counter-attacking team but now they are more than happy to dictate what is going on and are averaging a little over 50% of the ball compared to the 45% they averaged last season. The difference might seem minimal, but it all adds up over the course of a campaign.

There have been a sharp increase in their passes per defensive action (PPDA) numbers. Last term, their average was 15.34, this season it is 10.62. They are much more aggressive in their approach to regaining possession and this is evident in their defensive solidity map.

Last season, they didn’t really engage with the opposition until their defensive third. This time around, they’re looking to win the ball back in the opposition’s half.

One of the main beneficiaries of West Ham’s new approach is Declan Rice. The England international is now seeing a lot more of the ball.

On average, he’s attempting 13 more passes per 90. Extrapolate that over the course of a 38-game season and it is almost an extra 500 passes. A byproduct of this is that the No.41 is assisting double the number of shots he managed last season and his expected assists average (xA) has risen. Rice is also completing a higher percentage of his passes. He is a more mature, accomplished midfielder and he’s flourishing with the added responsibility of more possession.

The Hammers are the real deal and Moyes deserves a lot of praise for transforming this team into what they are today.