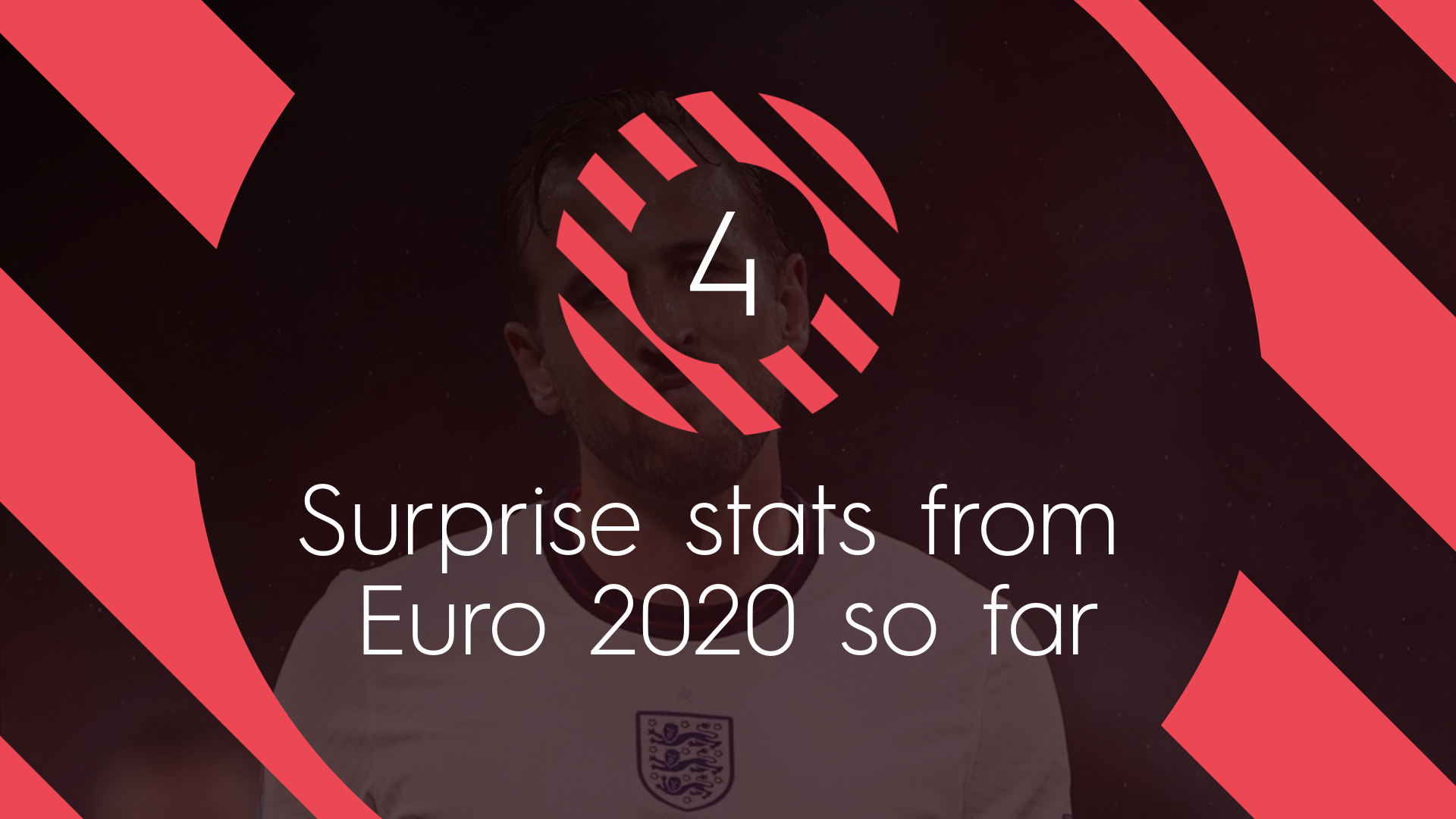 We had to wait a year for it, but Euro 2020 has already delivered.

There have already been a number of surprises at this year’s tournament, and there are still a number of group games to be played.

One of the biggest shocks is perhaps the elimination of Turkey. Tipped by many to be dark horses, Şenol Güneş’ men finished bottom of Group A having failed to pick up a single point. They conceded eight goals in their three outings and managed to find the back of the net on just one occasion.

Remarkably, however, Turkey rank sixth for attempted shots per 90 with 14. For this particular metric, they’re ahead of Germany, France, Portugal, England and Belgium. They also rank sixth for shots on target.

Here, we take a look at four other surprise stats from Euro 2020 so far.

All that attacking talent, no end product

England were named as pre-tournament favourites, primarily because of the depth they had in their attack.

On paper, there’s enough there to unlock any defence. There’s an attacking dynamic for every occasion.

Yet England have looked blunt in their two outings so far.

They eked out a 1-0 win over Croatia and had to settle for a 0-0 draw with Scotland. In both games, the woodwork was struck. On another day, the Three Lions could’ve picked up maximum points.

It is a mixture of both bad luck and poor play which has seen them land a combined three shots on target at the Euros so far.

If England are to go far, Southgate has to find a way to get them firing. And quickly.

Will the Belgium bubble burst?

Roberto Martinez’s side may be one of the favourites to win the tournament, and they may have some of the best attackers in the world at their disposal, but they’ve not been as dominant as some tipped them to be.

While their record is flawless having racked up wins over Russia, Denmark and Finland, clinical finishing may have papered over a few issues; namely their inability to create high-quality chances.

The Red Devils have six goals (excluding one unfortunate own goal from Finland’s Lukáš Hrádecký) from an xG total of 3.51.

Prior to their last group game against Finland, whenever they did land a shot on target, they tended to be hitting the corners. This does some way to explaining why they’re outperforming their xG by such a substantial amount. After all, no matter how good a goalkeeper is, hard shots into the bottom corners are difficult to stop.

Italy weren’t considered to be one of the favourites heading into Euro 2020. It was assumed they’d get out of what was a tricky group containing Switzerland, Wales and Turkey, but without the world-class players of yesteryear, many seemed to sleep on Roberto Mancini’s men.

Yet they’ve looked like the best team of the group stages. They coasted to three wins from three, keeping clean sheets in all of the games.

Everything about them screams sustainable.

The Azzurri scored six goals from an xG total of 5.41. They’re creating chances with great regularity and are currently hitting the target with 30% of their attempts.

One thing that is perhaps going under the radar is just how many goal threats they have within their team. It is a team littered with goals, even in midfield, as showcased by Manuel Locatelli’s two-goal showing in the win over Switzerland and Matteo Pessina’s deft winner against Wales.

No player has had more shots than Martin Braithwaite at the Euros. The Barcelona striker has taken 12 so far, putting him one shot ahead of Memphis Depay and two in front of Ciro Immobile, Patrik Schick and Breel Embolo.

Unlike that group of players, though, Braithwaite is yet to get off the mark.

His xG total of 1.27 highlights the fact that the majority of these haven’t been what could be classed as high-quality, but he’s only taken one from outside of the area.

Against Belgium, the 30-year-old had five shots in total but only one forced the keeper into a save. The rest were all blocked.

Denmark won’t mind too much after their heroic 4-1 win over Russia fired them through to the Round of 16, where they’ll face Wales on Saturday, but if Braithwaite can find his shooting boots they’ll no doubt pose an even greater threat.

Unless stated otherwise, the graphics and visualisations in this article use ORTEC data and were produced in the Twenty3 Toolbox.