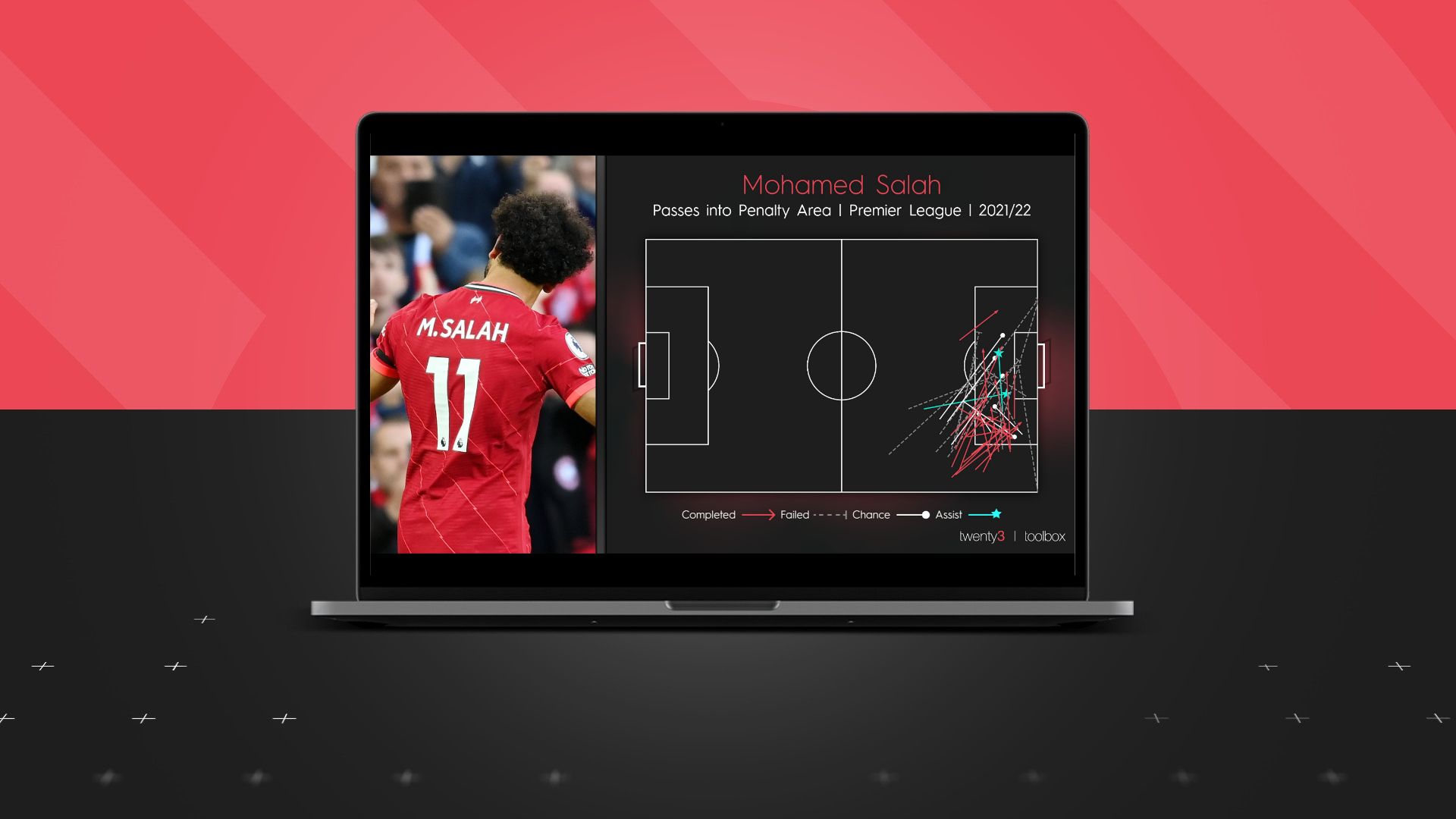 Mohamed Salah is arguably the most in-form player in the world right now. The Liverpool forwarded netted a stunning individual goal and provided an assist in the 2-2 draw with Manchester City to take his goal involvement tally to 12 in nine matches this season.

The prolific Egyptian – who has 134 goals in 212 appearances for the Reds across all competitions – has scored in seven consecutive matches across the Premier League and the Champions League.

Much focus has been on his goal return – no player in the English top-flight has more goals than the Liverpool No.11 so far this term – but his creative numbers are being overlooked.

Interestingly, Salah finished the 2020/21 campaign with just five assists (0.08 per 90) – his lowest return since the switch to Anfield. Now, however, his expected assists tally of 0.27 is the highest it has been for Liverpool. With the 29-year-old among the assists again, he is being lauded as one of the most complete forwards in world football.

So what is the secret behind the upturn in his creative numbers?

Using the Twenty3 Toolbox, I’m able to look at Salah’s pass map for the season and even filter it to only show passes that end up in the penalty area. Take a look at Exhibits A & B below.

Surprisingly, a lot of his passes into the area originate from that half-space on the right. You know the part of the pitch I mean, the one usually associated with Kevin De Bruyne and even Trent Alexander-Arnold.

Previously, it would’ve been near impossible to find out whether this was new or not. I could’ve looked at old pass maps but it would have been a lot of manual effort counting up such passes.

Now, though, with Twenty3’s Event Lab, I can go do some wizardry and put my amateur analyst hat on again. Not so long ago, we talked about how you can create your own metrics using our brand spanking new tool.

Not only can you do that, but you can also filter by location. 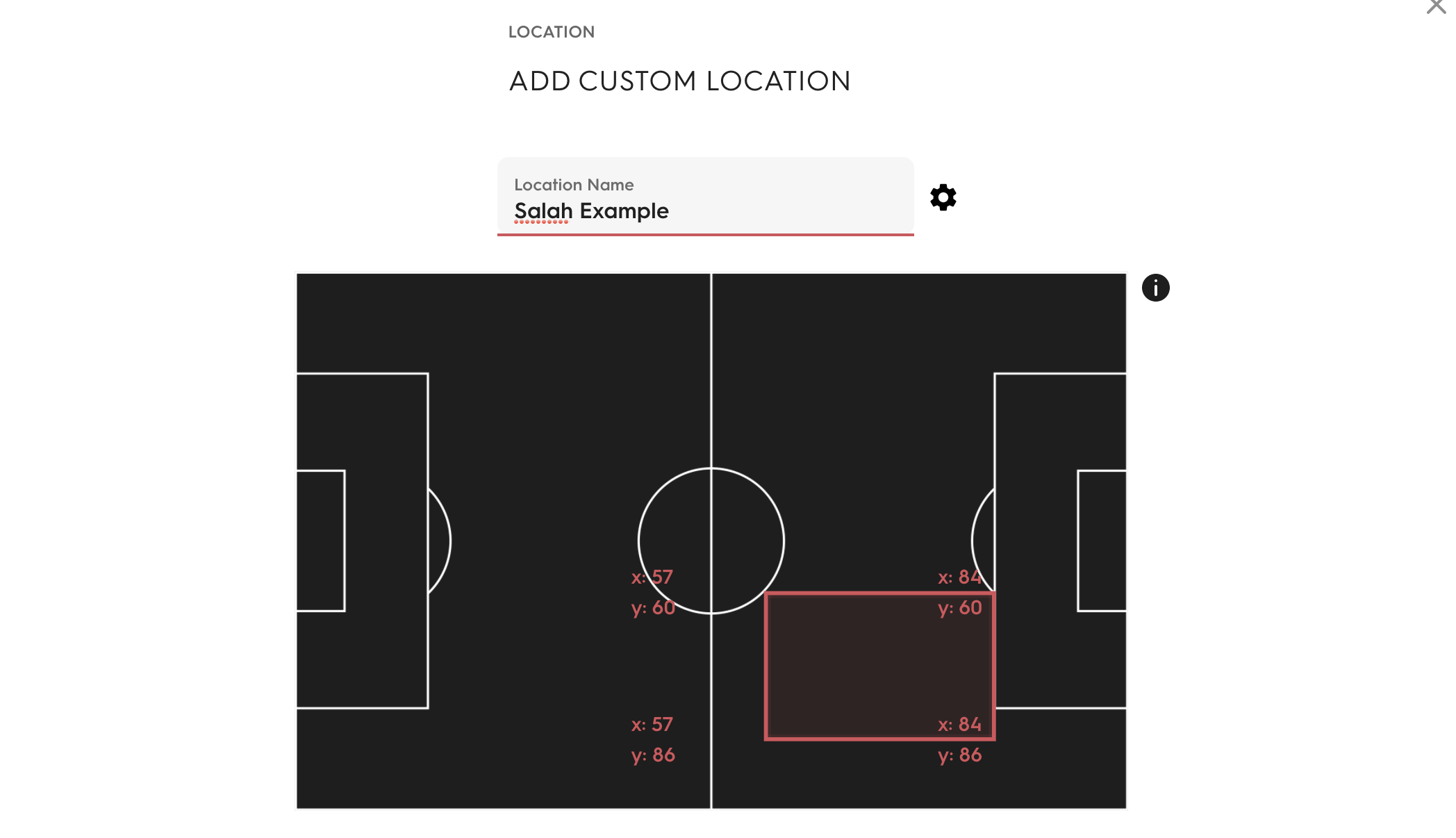 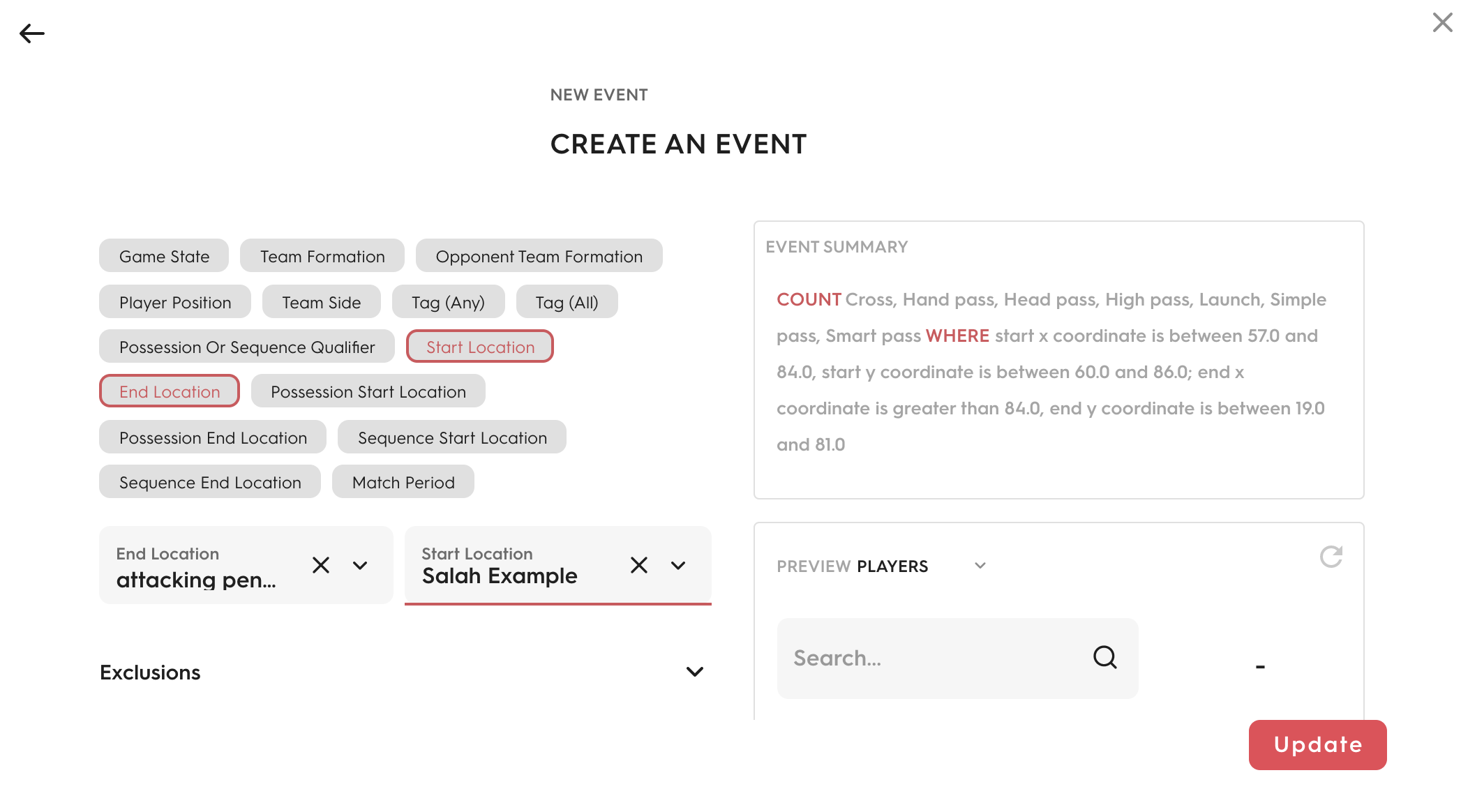 You can customise the location – as seen in the image above – and then tweak the metrics. In this instance, I wanted to see all of the passes which originated in the highlighted area and ended up in the penalty area.

The metric is then included in the stats shown. PIPA stands for ‘Passes Into Penalty Area’ and this is the one I created using the Custom Location filter.

Salah has attempted 21 of those passes in his seven outings, giving him an average of three per 90. For context, he was averaging just 1.7 last season. The sample size isn’t the largest, but it is intriguing.

Get me an Event Lab demo right now (please)

The former Roma man has seen his expected assists and his shots assisted averages rise when compared to what he was posting last season. This is despite the fact he is averaging fewer passes in general – 30 down from 34. A difference of four might not seem like much but extrapolate that over a 38-game season and it is over 150 fewer passes.

The Event Lab allows you to go into greater detail, too. For example, you can see how many passes he played into the area from that zone on a game-by-game basis. 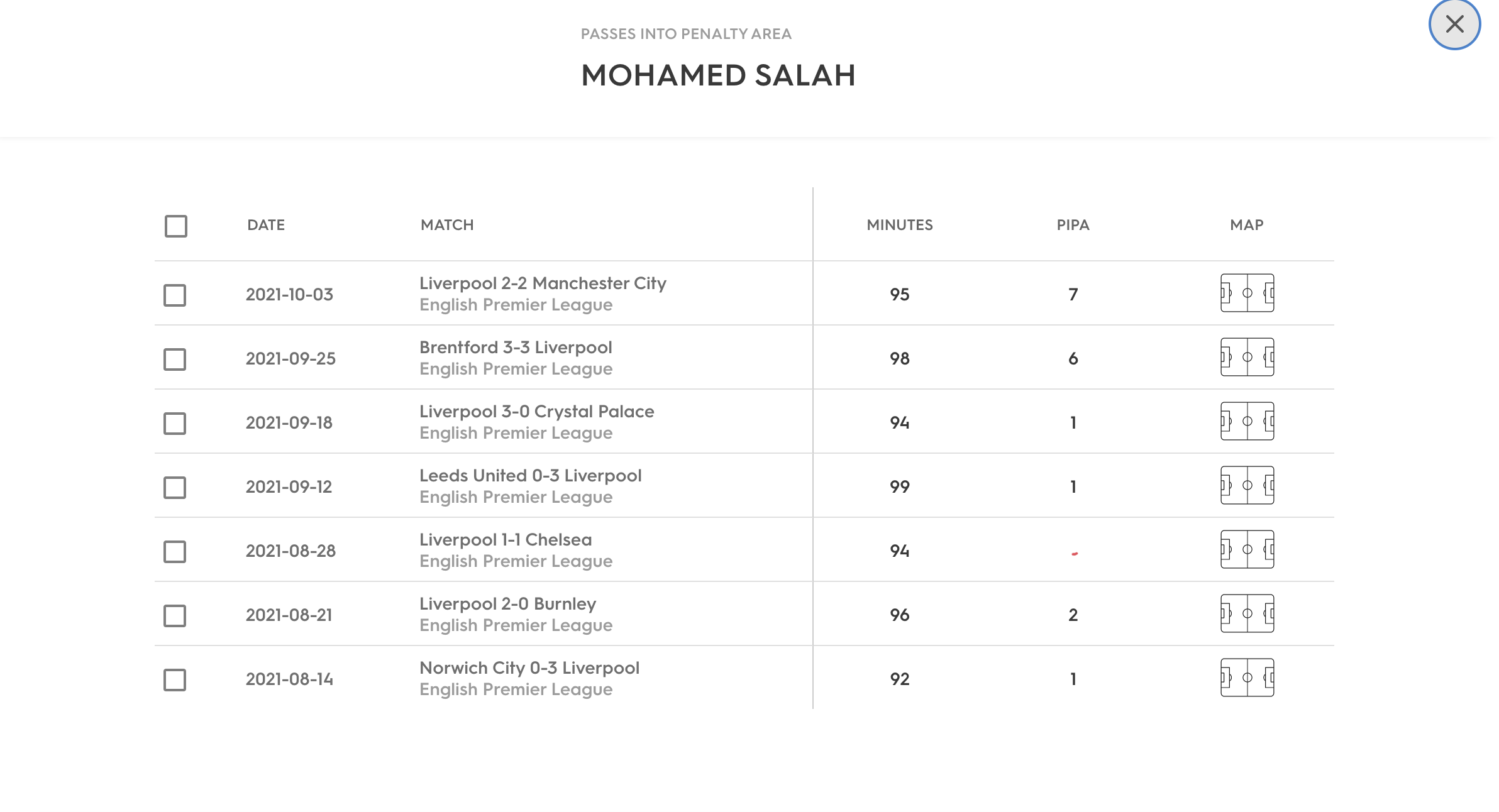 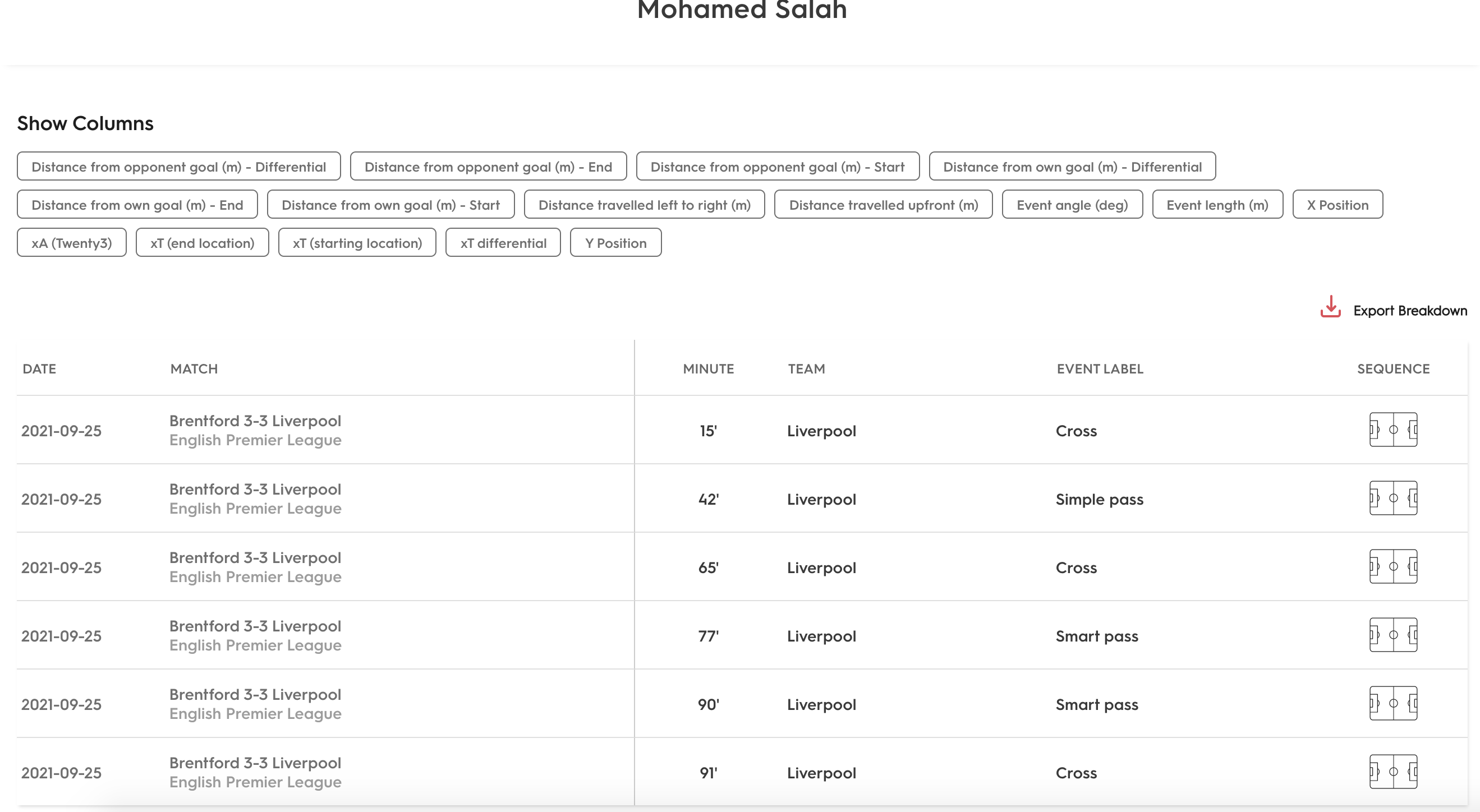 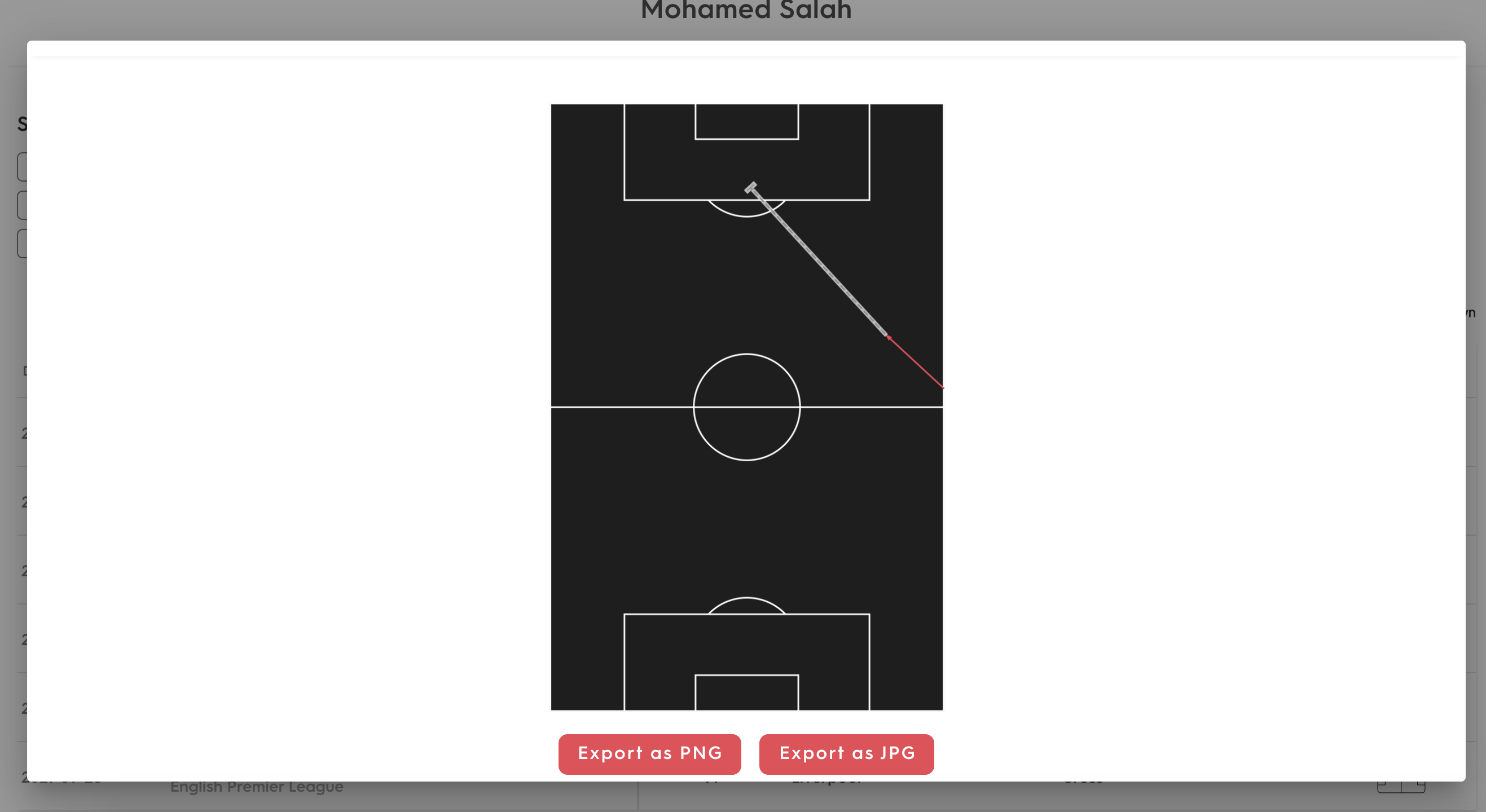 You can then look at each one from a match. Above, you can see that he attempted six against Brentford. It shows the minute and how it was categorised. Finally, by clicking the sequence tab, you can bring up a visualisation of the pass.

As an analyst for Liverpool, I’d be able to see that Salah was much more effective as a creator from this part of the pitch and this information could be shared with the coaches who could then work on patterns of play to ensure the one-time Chelsea man was getting on the ball in that zone.

An an opposition analyst, I could inform the coaching staff that Liverpool are getting Salah onto the ball in that area with greater regularity this season and he’s something of a creative menace from that part of the pitch. The coaching team can then work on ways to prevent the No.11 from getting on the ball or work on a system that prepares the players to deal with these passes into the box from that zone.