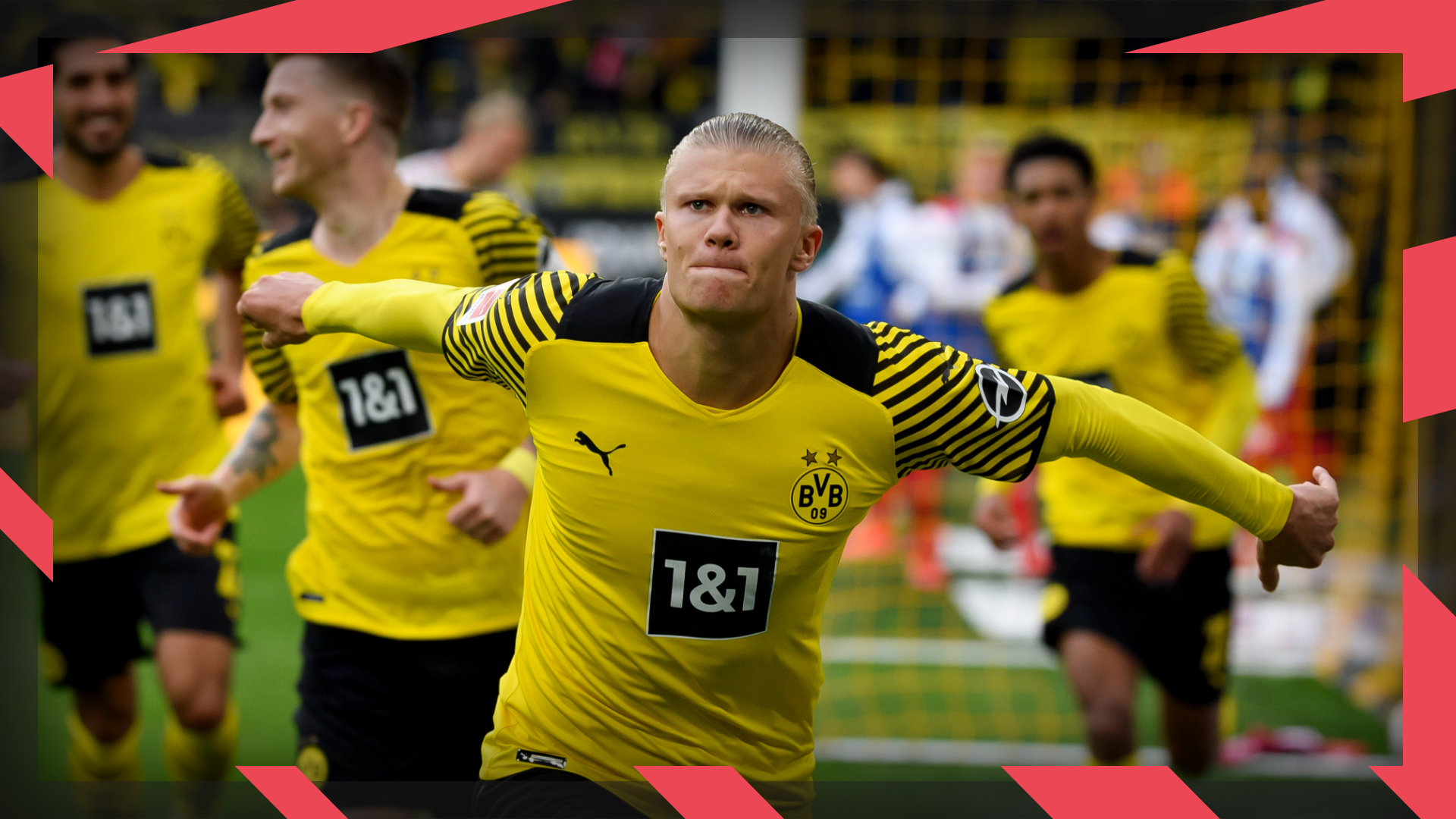 Erling Haaland was back in Borussia Dortmund’s starting XI on Saturday after nearly a month out. The prolific 21-year-old scored twice in a 3-1 win over Mainz to lift Marco Rose’s side into first place in the Bundesliga, albeit temporarily with Bayern Munich displacing them 24 hours later.

The double took his tally to ten goals in seven starts this term for BVB, he’s also chipped in with three assists across the Bundesliga and the Champions League.

Last season, he scored 37 goals in 36 matches across both competitions, of which 27 arrived in the German top flight. Unbelievably, the former Red Bull Salzburg striker might’ve levelled up.

During what turned out to be a transitional 2020/21 campaign for Dortmund, Haaland averaged 0.96 goals per 90 in the Bundesliga from an expected goals average of 0.7 having taken 3.18 shots.

This season, though the sample size isn’t the largest, his output has spiked. Haaland is currently averaging 1.39 goals and 4.5 shots while his expected goals average is 0.96.

Given he’s appeared in fewer than 600 minutes, it is difficult to really read into these numbers. However, something has changed. But what?

To get a better understanding of what, it is important to look at the difference in Borussia Dortmund this term under new manager Rose.

When comparing the numbers posted last season to the averages so far this term, there’s not much difference. They’re having roughly the same amount of efforts and their expected goal average is almost identical.

Rose’s men are attempting 28 passes fewer, though. Extrapolate that over an entire season and it is a difference of almost 1,000.

Fewer passes in general but output – in terms of goals and shots – remains the same. It could be argued that BVB had adopted a quicker tempo this season. Possession isn’t sterile in the defensive third and a larger percentage of their passes fall into the long category. By no means are they considered to be a direct team, but the aim now is to get the ball forward a lot quicker than they did under Lucien Favre.

Their desire to play in the opposition’s half instead of their own has presented them with more pressing opportunities and they are much more aggressive in their pursuit of regaining possession, as evidenced by their Passes Per Defensive Action (PPDA).

It is also visible in their defensive solidity map. This particular visualisation highlights where exactly Dortmund engage with their opponents. The brighter the red, the more active they are there.

Last season, BVB lacked an intensity when comparing it to this year. Rose’s men are aggressive in their approach in the middle third and are looking to regain possession in that part of the pitch to then sustain attacks.

Being more active in those parts of the pitch allows them to get the ball to their forward players with greater speed. From there, they can do more damage.

There’s also been a tweak to the way Dortmund build their attacks.

From a starting position point of view, summer signing Donyell Malen and Marco Reus flank Haaland in a 4-3-3 and this can be seen in their average touch map. However, on the ball, Dortmund are looking to overload the left side with Reus shifting over from the right to link up with Malen and Haaland.

As a result of this, the BVB No9 is attempting twice as many link-ups this season. Having what is essentially multiple strike partners is creating more space for Haaland and he’s making the most of it.