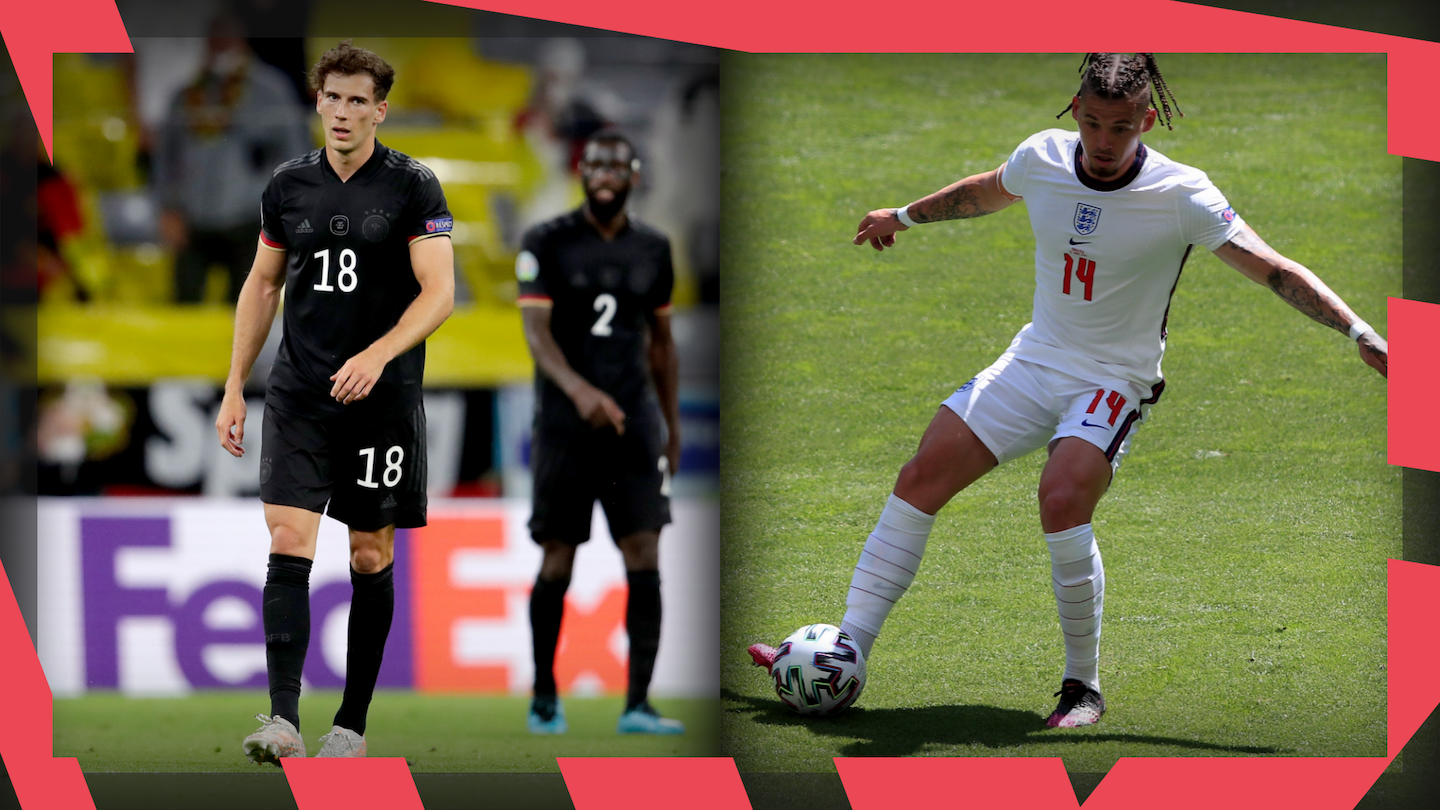 It’s a classic in international football: England versus Germany. In the round of 16 at this year’s European Championships, the old rivals will meet for the 37th time in history. Both teams currently have a lot in common. By the way, this article is also available in German.

Both England and Germany have a plethora of top-class individuals in attack, but struggle to untap their full potential. Gareth Southgate and Joachim Löw rarely convince with their tactical work. Southgate perhaps errs on the side of caution and stability, while Löw makes Germany’s ball possession game too schematic and predictable.

Looking at the previous games at Euro 2020, it almost seems as if Germany are relying on their opponents to make mistakes in order to be successful. Because Löw only marginally adapts his own style of play. He relies on the same processes, which are sometimes more and sometimes less successful. The clashes with Portugal and Hungary illustrated this impressively: While Portugal defended very compactly in the defensive third and left the wings free, Hungary occupied the flanks with two active and dynamic wing-backs. The result was that the German wide players, Robin Gosens and Joshua Kimmich, could show off against Portugal but were largely ineffective against Hungary.

Another example of Löw’s inactivity was Matthias Ginter and his appearance against Hungary. Ginter was deliberately left unmarked by the opposition press, as the Hungarians intended to direct the ball to the fairly limited Borussia Mönchengladbach defender. Ginter found himself in the middle third without any passing options – so, out of desperation, he attempted cross passes from 20 or 30 yards out. Löw did not help Ginter, who is actually one of his favourite students, and waited until half-time to change formation.

Alternatives to the wing attacks

Germany’s offensive game is always characterised by diagonal balls and attacks on the flanks. England play like Portugal in a 4-2-3-1, but use the formation a little differently when defending. Southgate’s full-backs are not as close to the centre-backs as the Portuguese – which can be seen in the locations where left-back Luke Shaw makes his defensive actions (below).

As long as Shaw and Kyle Walker (or another right-back) stay in contact with Kimmich and Gosens, at least diagonal balls in the early stages of attacks will not be an effective means for the German team. But the Germans have to find ways to not only survive the first phases of possession without losing the ball, but also to gain effective space. Long and slow passing sequences can be dangerous against England as soon as the first English pressing line pushes up the field and applies a man-oriented press.

That is precisely why the Germans should finally be able to make better use of the centre of the pitch. So far, the attacks through the middle have mostly remained ineffective because there is no depth up front. In many cases, the three strikers move in the same line. Without vertical movements, there is a lack of dynamism and it is also difficult to disrupt the defensive shape.

The passes from midfield are precise enough that they can get into the space between the lines in front of the defence, as was evident in the game against Portugal. But then attempting to switch to the wing afterwards could be unsuccessful against a defence like that of England. As the below graphic for Kai Havertz shows, the average position of the front three players in Germany’s 3-4-3 is almost identical in terms of height. Most of the follow-up actions after receiving the ball then go wide.

More dynamism in the middle

There are a few ways to change this situation. But if we assume that Löw will not significantly change his standard 3-4-3 formation, then either individual roles will need to be interpreted differently or taken up by different personnel. An obvious option would be to bring in Leon Goretzka instead of one of the traditional midfield players.

Goretzka would provide dynamism with his forward runs into the attacking spaces and perhaps also cause some organisational chaos for England.

In addition, Goretzka can physically compete with Kalvin Phillips when retreating to defend. Because we must not forget that while the Germans may have more possession, the English will not be completely without the ball. Phillips showed at the beginning of the tournament that his advancing runs can be an important ‘x-factor’ in England’s attacking game.

Southgate’s system is characterised by a great urge for stability, which is why Phillips could mix it up with his vertical runs to ensure England aren’t too predictable.

Given his box-to-box style, Goretzka would also be an important factor in finding space between the lines, offering Mats Hummels and Co. another passing option. England’s attacks tend to run through Harry Kane, who drops back and picks up the ball deep. Of course, one of the three German centre-backs could follow Kane. But that shouldn’t happen too often, because then Germany will lose their compact defensive shape because they are often too slow to close the gaps.

Goretzka is certainly not the only solution for Germany, but given the circumstances – especially considering Löw’s relative inflexibility – he could be the right candidate in central midfield.

As a matter of principle, Germany must play more through the middle, be more selective with their use of the outer lanes and therefore less predictable, while also protecting against England’s threat through the middle.